The ongoing health and economic effects of COVID-19 continue to force local government to re-evaluate how they distribute resources and organize public benefit programs. And nearly one year into the pandemic, cities are still figuring out the best strategies to engage their most at-risk populations both online and in-person, particularly as the health crisis reaches its worst levels yet.

In addition to devastating businesses and shuttering government offices, the pandemic continues to upend the traditional avenues that cities use to get information out to the public. City council meetings have been replaced by publicly shared Zoom links. Appointments for services like housing assistance and job training have to be reconfigured to accommodate social distancing requirements and restrictions on gatherings between people from different households.

And the pandemic’s economic fallout — state and local budgets are expected to be short by more than $500 billion in the coming years — has only made it more important for cities to expand these programs’ reach as people struggle to pay their rent, buy groceries and stay employed, said Santiago Garces, the director of community investment for South Bend, Indiana, and a former chief information officer in Pittsburgh.

But, Garces said, trying to maintain the necessary levels of engagement with the public has taken a great deal of experimentation.

‘Try to deliver the same experience’

“There’s some challenges and some opportunities based on the pandemic,” Garces said. “The pandemic has precluded us from being able to have the traditional meeting, so we’re definitely looking at some different tools that enable the city to not only maintain, but expand community engagement and community feedback to people that haven’t participated as much. So it’s a little bit tricky, but that’s the first order of business, and technology plays a big role.”

Garces, who started his role in South Bend in mid-November, has already gotten to work in building out the 102,000-resident city’s digital outreach capabilities. That’s included launching a technical assistance program for local businesses and buying Zoom licenses for neighborhood associations to use during meetings — as well as obtaining conference-call numbers for older residents who aren’t comfortable using a video-conferencing service.

He said the flexibility of “meeting people where they’re at” has been his top priority his the new role.

To refine the engagement process during the pandemic, though, some state and local officials say they’ve tried to differentiate which kind of outreach is most effective for different demographics and neighborhoods, rather than offer all kinds at once.

‘Is it the way we’re engaging?’

In San Antonio, officials are planning an experiment testing different types of engagement strategies for the city’s social services in low-income and underserved neighborhoods. The experiment, which is being conducted with the assistance of Bloomberg Philanthropies’ What Works Cities program, is modeled after so-called A/B testing, an online marketing strategy in which groups of users receive different messages for the same product to determine which approach is most effective.

“We’ve got different things, and we want to see, from a multichannel standpoint, what can we do to use science, math, data to see where we can target our efforts,” said Matthew Reat, a senior innovation specialist in the city’s office of innovation.

The experiment, which could be approved as soon as this month, is four months in the making, said Kate Kinnison, San Antonio’s research and development administrator.

As the pandemic took hold, residents started signing up in droves for emergency housing assistance programs from the city, but not for other assistance programs that the city had received federal funding for, like workforce training programs. The disparity between programs raised questions about how well the city was communicating its programs for Kinnison and Reat, who said they’re going to share the results of the experiment with the city’s economic development, human services, housing and 311 departments next year.

The experiment will also test whether residents respond to benefits programs at higher rates when prompted by community organizations and nonprofits rather than when approached directly by the relevant agency. Reat said that research will probably reveal multiple “sweet spots” that the city is missing in its current engagement efforts.

Like South Bend’s Garces and his investments in video chats and conference calls, Reat said planning the San Antonio test has been a “call to action for us to say what can we do and what can we do better.”

Getting the data early

And because the pandemic has forced people to rely on in-home and mobile internet connections to receive news and sign up for some city programs, some San Antonio officials have made efforts to better map the parts of their city where the digital divide is sharpest, which will inform where the most outreach is needed.

The city began sending a digital questionnaire out to residents at the onset of the pandemic to help them determine if they should get tested for COVID-19 or not, said Emily Royall, San Antonio’s smart city coordinator. Royall, who is also part of the city’s innovation office, mapped where responses to the questionnaire were coming from, quickly realizing that parts of the city with less reliable access to the internet were responding less frequently than those with reliable access.

Because San Antonio had already completed a study of which neighborhoods lacked adequate broadband access in January, Royall said the city already had data on where the digital divide was the starkest. To reach residents without internet access, Royall said, the city deployed staff to go door-to-door with COVID-19 information regularly for three months, gathering data from residents that couldn’t access the questionnaire.

Royall worked with the city’s public health agency to use GIS tools that mapped which residents had been approached and received services, and also outlined which areas remained to be canvassed. The data was compiled in Esri’s GIS platform and visualized, creating a “command center” that officials could use to decide where additional resources and information should be delivered within the city.

This story is part a StateScoop and EdScoop special report on the lessons of 2020. Read the rest of the report. 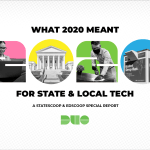 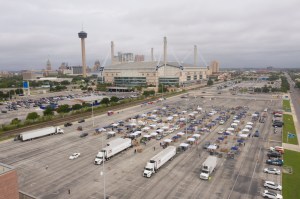 Cities are just getting started with COVID-19 engagement