Projects submitted by Columbus, Macon, Milton and Woodstock were selected by the Georgia Smart Communities Challenge Tuesday for funding plus access to Georgia Tech’s academic resources to further develop their projects.

Civic projects in each of the four communities will receive $50,000, as well as technical assistance from Georgia Tech researchers to develop pilot projects that use technology and data — including “internet of things” devices, data centers and portals, web and smartphone applications, and automated digital services — to boost mobility among municipalities in Georgia.

The projects being pursued by the four communities, which make up the Georgia Smart program’s second cohort, vary in focus. In Columbus, officials will use the funding and access to a network of researchers to begin scouting out locations to place devices in the city’s Uptown district, a growing neighborhood that has experienced a recent influx of new residents and businesses. The devices are intended to be outfitted with free public Wi-Fi, license plate readers and pedestrian movement sensors to support first responders and public safety officials.

Macon plans to install kiosks to expand access of the city’s digital services to residents without high-speed mobile or fixed internet access, similar to the LinkNYC kiosks placed around New York City. Instead of traveling to City Hall, Macon residents will instead be able to look up information about elections, public health and public safety from the nearest terminal. Officials intend to deploy the kiosks in public spaces in underserved neighborhoods, like community centers, libraries and high-traffic pedestrian areas. The exact locations will be determined by spatial and statistical analysis conducted by student and faculty researchers at Georgia Tech.

The cities of Milton and Woodstock, meanwhile, will focus their funding on improving mobility for drivers, cyclists and pedestrians. Milton, an Atlanta suburb, aims to promote students’ walking and biking to school by using its Georgia Tech grant to develop a mobile app that allows parents to monitor the locations of students that are walking to school together, encouraging formation of what the city calls “walking school buses” that will reduce vehicle congestion and improve pedestrian safety.

Woodstock will use its award to conduct a study of its current traffic congestion, as well as develop a charter that guides the city’s use of data in future projects.

“We are proud of the work and accomplishments the first class of Georgia Smart has already achieved and know most will continue their research partnership in year two,” Lam said in a press release. “We are also looking forward to bringing a new class in and expanding the portfolio of smart applications for community and economic development. Most importantly, though, we remain committed to all communities in Georgia and will continue to provide programming and opportunities for them as they develop their own smart future.” 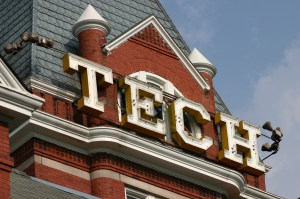