As cities across the country attempt to integrate smart technology into their infrastructure, some communities are starting from scratch. Developments near Toronto, Boston and Phoenix will create neighborhoods laden with smart technology — like micro-grids for electricity and all-in-one sensors for noise, light and air quality — from the ground up.

In the process, local governments are reckoning with familiar issues, including data collection, civic inclusion and bureaucratic hangups, in ways that contemporary “dumb” cities haven’t experienced. These planned developments, which typically incorporate public-private partnerships and rely on big data for key decisions, demand careful attention on issues that might arise as the core technologies are introduced to the world.

In Toronto, secretive planning agreements have cast public doubt tied to widespread data collection. In Boston, developers are considering the best ways to put people — not technology — first. And an ambitious, tech-heavy community in Phoenix has experts considering what it takes to build an entire city, much less a smart one, from scratch. Despite such challenges, these municipal Internet-of-Things laboratories of the future are moving ahead.

Sidewalk Labs, Alphabet’s urban technology and planning company, established a partnership in October of last year with Waterfront Toronto, a tri-governmental public corporation charged with overseeing the revitalization of the city’s eastern shore.

The agreement was signed on October 16, 2017, and the deal was publicly announced the following day. When the deal was signed, however, Waterfront Toronto and Sidewalk Labs did not share the details with federal, provincial or city governments. According to a January 2017 report from the office of former deputy city manager John Livey, “the Framework Agreement between Waterfront Toronto and Sidewalk Labs was not shared with governments prior to the Sidewalk Toronto announcement.”

The details of the project’s framework are still confidential.

The public has no way of knowing what the actual arrangements of the partnership are, which is a huge concern, said City Councillor Paula Fletcher, who has not seen the framework herself. Fletcher said she is only allowed to review the framework if she signs a nondisclosure agreement immediately after, which she has declined to do.

An equal concern is that Sidewalk Labs — a sibling company of Google under the Alphabet Inc. umbrella — has already devoted $50 million to the project. With that allocation, Sidewalk Labs is effectively funding a secret planning process, and “one that has citizens unsettled with the whole affair,” Fletcher said.

“The question is,” Fletcher said, “how all the data will be collected, will be used, who will own the data, and especially after the exposure of Cambridge Analytica and all of the data that was used in the [2016 U.S. presidential] election — people are very uncomfortable. It’s all in secret and it’s all about data that people realize is being traded and used in ways that they hadn’t anticipated.”

Toronto city government says it’s aiming for the community to be an environmentally friendly, mixed-use, mid-density development. Sidewalk Labs will supply the tech to be included in construction from the very beginning, including autonomous vehicle-friendly roadways, affordable modular living, working and recreational spaces, robotic waste management systems and — of course — data-collecting sensors on virtually every surface.

Sidewalk Toronto is located on public land, and Torontonians have made it clear that the constant surveillance of smart sensors to be placed in Quayside should not taken lightly.

“There are far fewer concerns or conversations taking place around the built-form recommendations or suggestions that were identified in the original proposal,” Brail said, “and the real greatest areas of concern are around data governance, data access, the data privacy piece, and highlighting flaws in our own governing systems around data strategies.”

Following a report issued to city council in January, Doctoroff said last month that Sidewalk would destroy nonessential information collected by sensors, only retain data that would improve the quality of life for citizens and not sell data to advertisers.

“As welcoming as Canadians are and as welcoming as Torontonians are, in order to work in Toronto and understand the complexities of our political system and planning system and our neighborhoods and communities, there really needs to be on-the-ground engagement and involvement and embeddedness,” Brail said.

The challenge for Sidewalk Labs, Brail said, has been finding its place within the political and social spectrum of Toronto.

“We’re probably behind many U.S. cities in this regard, but we have a number of strong community organizations as well as a number of civic leadership organizations and a number of non-profit organizations that have played a really tremendous role in all aspects of urban development,” Brail said. “It’s this civic space that they need to be able to embrace and embody more than the specific physical form.”

The origin of Union Point, a smart community development 12 miles south of Boston, bears similarities to Quayside. LStar Ventures, the lead developer of the project, was approached in 2015 to redevelop an out-of-commission naval air station sitting on portions of land owned by Abington, Rockland and Weymouth, three suburbs of the city.

Kyle Corkum, CEO of LStar Ventures, told StateScoop that he had to google the definition of “smart city” 18 months ago. Since then, Corkum said, more than $200 million has been invested in the 2,000-person community’s infrastructure — with another $100 million scheduled this year. Corkum and LStar own all of the buildings at Union Point, but work with a planning board composed of representatives from the three towns to approve new infrastructure and technology.

Most of the technology will come from General Electric, LStar’s primary partner for the project. While the space will always be a “lab environment” for new technology, Corkum said, GE is expected to initially experiment with smart street lighting, micro-grids, solar and carbon power and other sensor technologies, according to GE Power’s Strategic Growth Leader Alex Klein.

Corkum, though, is adamant that the 1,550-acre property won’t implement technology for technology’s sake.

“We’re not trying to create a utopian city,” he said. What we’re trying to do is create something that’s relevant to the people of Boston. The goal is that we come up with a real society in a real community that governs itself and sets its own goals in the coming years. It’s an organism that evolves and changes. What we specifically asked for from the towns was the freedom to let that happen.”

A data storage and collection plan is still in being worked out with law firms and analysts, Corkum said. He intends all data collected by sensors to be open-sourced, or available to the public and to other companies working in Union Point or on similar projects around the world.

“We’re feeling a tremendous amount of responsibility as stewards. This stopped being a real estate deal a very long time ago. This is a mission and a purpose now,” he said.

Social missions can be as challenging as the technology itself, though. When considering how to design autonomous-vehicle-friendly roadways, for example, LStar had to prioritize — should it build something recognizable to Bostonians or something optimal for machine learning software? Corkum considered building sensor-embedded streets that would immediately tie into current autonomous-vehicle software.

“You could do that, or do you build real city streets that mimic the quirky streets we have in Boston and then look for new ideas and innovations that could work in that environment?” Corkum said.
So even though the streets would be new, they’re replicating some older street patterns. We opted for the older model.”

Residents can expect a similar approach to other quandaries that improvements in civic tech might bring.

“Technology changes so quickly. It’s not realistic to try to predetermine how everything is going to play out,” Corkum said. “What we were really dogged about was saying listen, we want to be a living laboratory for everything; social, health, creative arts, inclusivity and technology.”

Union Point and Quayside, while early in their development, will undoubtedly benefit economically from their proximity to robust, already-innovative cities. Belmont, Arizona, an undeveloped, 24,800-acre plot roughly 40 miles west of Phoenix, doesn’t have that luxury — but is still being hailed as Arizona’s best opportunity at a community constructed with “future infrastructure,” according to Grady Gammage, Jr., an Arizona-based lawyer and representative for the development.

Gammage is representing Belmont Partners, who announced an $80 million investment into the property in November of last year. The investment was made by a shell company of Bill Gates’ investment firm, Cascade Investment LLC, but Gates himself hasn’t spoken on the project. Gammage also declined to provide comment to StateScoop.

The initial statement doled out some details for the planned community: nearly 80,000 residential units, 3,800 acres of industrial, office, and commercial space, 3,400 acres of open space and 470 acres for public schools.

When completed, Belmont will rival Tempe — the eight-biggest city in the state by population — in size. To get to that point, though, the developers will have to prove why people should move there, regardless of the technology, experts say.

“This, not being an organic city — not just something that grew up because it makes perfect sense to put it in this location, because its on a transit system or able to get product to market, or its close to natural resources where manufacturing will be able to succeed at low cost, or it will have a large labor base — it has a lot of things stacked against it in terms of it being a natural experiment,” Swindell said. “You can plan a community, but once its lived its initial lifespan — if there is no reinvestment, if there’s no normal, natural culture that’s going to attract new businesses as old ones become obsolete and fold up, if people aren’t going to move in as kids grow old and move out, then it will die.”

It’s unclear if there’s a primary tech partner in on the deal yet, like Quayside or Union Point. Nonetheless, the developers have ambitious plans. They’re betting that the yet-to-be-built interstate 11 will run in proximity to the development, which will fund a “flexible” city built around “cutting-edge technology, designed around high-speed digital networks, data centers, new manufacturing technologies and distribution models, autonomous vehicles and autonomous logistics hubs,” according to a press statement.

The development hasn’t been referred to as a “smart city” officially yet — but that might not matter if it has little else going for it, Swindell said. Right now, its as close to a “controlled experiment” as ground-up technology-focused developments can get, he said, by virtue of having no factors outside of technology that would draw families or businesses.

Gammage and Belmont Partners say the plot is “strategically positioned,” but offer little explanation beyond the potential I-11 corridor that would run through the city. There’s even less explanation on how the community will sustain itself.

“How do you find the capital that will fund infrastructure for the long term?” Swindell said. “You don’t have a city unless you can attract residents. So how will they attract people to live there — which means you’re going to have to have jobs for these folks. You’re building an economy, not just a testbed for technology and infrastructure.”

With only one press release out so far, it’s probably too early to determine the fate of Belmont, Swindell said.

“No one knows how successful it will be,” Swindell said. “If anybody tells you they do, they’re lying.”

This story was updated shortly after publication to clarify that the framework agreement between Waterfront Toronto and Sidewalk Labs was not shared with governments prior to the Sidewalk Toronto announcement. 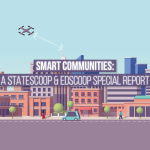