A pair of state IT officials said Wednesday they’re starting to see the effects of federal pandemic recovery money flowing in, and have started using the funds to better equip remote workforces, improve network security and expand broadband.

The $1.9 trillion American Rescue Plan that President Joe Biden signed in March included $350 billion tailored for state and local governments. And unlike previous rounds of COVID-19 relief packages, that money came — at the urging of groups like the National Association of State Chief Information Officers — with few restrictions on how those governments could make use of the aid, opening the possibility for states, cities and counties to use it for long-overdue technology projects.

So far, tech leaders say they are benefitting from the plan. During an event Wednesday hosted by MeriTalk, both Rajiv Rao, the chief technology officer of New York, and Maryland Secretary of Information Technology Michael Leahy said yes when the moderator, former Massachusetts and California CIO John Thomas Flynn, asked if they felt they were getting their “fair share” of American Rescue Plan funds.

While New York Gov. Kathy Hochul only released the state’s initial plan for its $12.75 billion in ARP funds on Aug. 31, Rao said Wednesday the money will help the state government continue to convert its workforce from a desktop-oriented organization to one that’s more flexible and mobile.

“We went from a 20% mobile workforce to 80%,” he said. “We’ve switched out our refresh strategy to laptop-first to enable people to work from home or work from wherever.”

Rao also said the state’s also been spending money on beefing up its network infrastructure so the workers who went virtual last year can continue logging on while away from the office, and strengthening edge security to better certify the identities of remote users.

Much of this IT spending happens behind the scenes. Leahy said that the most visible bit of the American Rescue Plan’s support for state and local governments is the billions of dollars for broadband expansion after a crisis that exposed the severity of the digital divide. While Leahy does not have a direct hand in broadband deployment — the Maryland Department of Housing and Community Development oversees the state’s broadband program — his office is lending technical assistance on how to use the $30 million for new development Gov. Larry Hogan announced in July.

“It’s the people issue,” Leahy said. “We have focused very strongly in Maryland in terms of utilization of broadband. The most important thing is knowing what data we have, were it resides.”

“To my knowledge it seems to be working very well,” said Leahy, adding the Maryland Department of Labor is responsible for its own IT needs, while his agency serves in an advisory role when needed. Rao, noting that New York is more consolidated, said “we’ll be in good shape.”

During a second panel discussion, Rick Kryger, a deputy chief information officer at the U.S. Labor Department said that improving states’ unemployment programs will be a priority for “years to come,” beyond just cracking down on fraud.

“Direct grants to states have to be a component,” he said. “What are some commonalities to develop common IT systems that can be used in multiple states? Keeping systems modern is an ongoing thing, it’s never going to go away.” 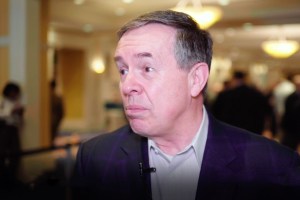