“When you think about budget cycles, they generally depict our values,” Tomes later told StateScoop during the event in National Harbor, Maryland. “Where we spend our money, both personally and professionally, has a lot to do with our values, but sometimes the things that are most important to state government aren’t necessarily the things that have the highest price tag associated with that.”

He pointed to Minnesota’s investments in cybersecurity and broadband, which sometimes have “incongruent” strategies across agencies or branches of government. Implementing cohesive and thoughtful strategies isn’t necessarily a matter of funding, Tomes said.

Interagency work, such as Minnesota’s Children’s Cabinet — an initiative spanning health and education departments to tackle issues affecting kids — is one way the state is building strategies to ensure funding is spent efficiently, he said.

“I think we’ve learned over the course of the pandemic that we as a collective can achieve great things,” Tomes said. “When crisis and emergency hits and boundaries of who and what are lowered, that we can really make profound differences. And we have to make sure we continue to capitalize on that as we look at these interagency efforts.”

Acting California CIO Russ Nichols told StateScoop he agrees that while a state’s latest $50 million “monster project” is likely solving an important problem, many problems can be solved far more cheaply. Nichols, who was formerly CIO of California’s corrections department, said he saw that firsthand during a 2018 state IT project in which a basic app was created to schedule inmate visits.

“That sounds simple, but in a lot of small towns where we have prisons, people would literally line up at the gate and there’d be a line of cars all the way backed up through town,” Nichols said. “With no facilities, no food, no restrooms. Huge impact on the local communities. [With] a simple app modeled off something like OpenDoor, [you can] make a reservation so now you know when to show up. Very simple to implement, very quick to implement, huge transformational change. Across the state, we have all kinds of things like that.”

During a panel discussion, Nichols shared with state IT leaders and tech vendors in attendance another example of organizational change that doesn’t cost millions: Stop doing the things you do badly.

“In government services, good, bad or indifferent, it operates forever, and we get culture lock-in on whatever those processes are,” Nichols said. “We have a huge focus on getting folks to step back. Stop turning the crank just because the crank’s there. Is that the right crank at all? How do we shut off those services and really get the people, of California in this case, to move on to something better?” 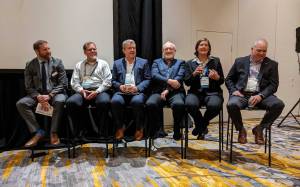 Not every state IT project needs to cost millions, CIOs say