State CIOs see themselves as business people first and technologists second. That theme has been increasingly obvious to members of the National Association of State Chief Information Officers in recent years, and the organization’s latest membership survey confirms it. But this year, the message is aimed at as a new audience just around the corner.

NASCIO’s 2018 State CIO Survey , released at its annual conference in San Diego, comes ahead of November when 36 gubernatorial elections, 18 of which include term-limited governors, are expected to bring a new cohort of IT leaders who might not be accustomed to this emerging paradigm.

Several state IT leaders told StateScoop during this conference they expect their entire IT leadership teams to be dislodged by a new governor in January. Others forecast more modest changes ahead, particularly in states where the political party is expected to stay the same, but retaining the knowledge of the CIO community will nonetheless present an unprecedented nationwide challenge in 2019.

Moreso than in past years, NASCIO Executive Director Doug Robinson told an audience of state IT professionals and vendor representatives that the 2018 survey can serve as a guide.

“We know there are going to be changes, so we wanted to capture stories from the trenches from the current state CIOs,” Robinson said.

In quantity, at least, Robinson was successful. This year’s survey received responses from 50 NASCIO state members, a leap over past surveys, in which it has been typical to see perhaps a dozen states forgo participation. CIOs and deputy CIOs weighed in on top issues like digital government, application portfolio management, the evolving role of the CIO as a broker of services, and legacy modernization. (Cybersecurity is covered in a separate annual NASCIO report.)

After years of NASCIO trumpeting a coming transition wherein the CIO would become less of a hands-on tech repairmen and become more of a business person and broker of IT services , the overarching findings of the 2018 survey universally validate that idea.

In the survey, CIOs consistently ranked communication, relationship-building and strategic thinking as the top skills needed for the job. They frequently highlighted “the need to build strong relationships with key stakeholders at the governor’s office, agency and legislative level, and to develop a strong understanding of the budget process and relationships with the budget office.”

Technology expertise ranked as the ninth most important skill for a CIO.

In 2018, the state government CIO typically is focused on encouraging others to think in terms of the entire enterprise and to educate the legislature and other stakeholders on the challenges faced by IT organizations saddled with aging infrastructure and even older organizational structures.

“A focus on enterprise vision and strategy, security and risk management, and agency customer service and relationship management were seen as the most critical dimensions in order to make a difference,” the report reads.

‘Not just a pretty site’

Before the NASCIO audience on Tuesday, Robinson sat with Johanna Clyborne, CIO of Minnesota, and Amy Tong, CIO of California, to explore several of the reports more salient topics. But whatever the topic, the conversation nearly always turned back to the importance of business relationships, communication and collaboration across agencies.

When asked about digital government, a widening category of technologies citizens use to interact with government, Clyborne said that while her state doesn’t put strong governance around collaboration, collaboration is the key to making new projects successful.

“What I’ve found is sometimes we have great concepts, but how do we get it out to everyone else?” Clyborne said. “For us, it’s how do you give access to citizens to all the different facets of state government in a way they can actually get to it, not just a pretty site.”

Tong cited similar priorities of collaboration during project development and accessibility for citizens.

In most states, IT organizations have gradually become more centralized, granting greater visibility and control to the CIO when it comes to project management and establishing shared services. But realizing the benefits of IT centralization and consolidation is traditionally hampered by human intransigence and bureaucratic lethargy.

Asked about application portfolio management, both Tong and Clyborne cited cultural barriers as a major challenge.

“No one likes change but a wet baby,” Clyborne said. “They feel like they’re going to lose control.”

But both CIOs agreed that centralized application management is critical for optimizing IT. Clyborne guessed her state provides around 200 executive-branch-level applications, and Tong declined to cite a number, instead characterizing the figure as “scary.”

Getting other agencies to buy into portfolio management, she said, centers around simplifying the discussion and focusing on the incentive that agency is being offered — it’s all about providing value .

“Once you get that clarity, you’d be surprised how much you can do,” Tong said.

California and Minnesota each have plenty of legacy systems. Tong said many of California’s systems, some of which are about 40 years old, could cost between $300 million and $500 million to upgrade.

A transition toward iterative development processes and modular funding methods is helping to convince legislators to fund this work, Tong said.

“It keeps accountable. If we don’t deliver, we don’t get that funding,” she said.

Caifornia’s increased use mirrors national statistics — NASCIO’s report shows that in 2015, few states used agile development, but in 2018, almost half of CIOs report widespread use. Many others are piloting the methodology or using it in a limited fashion, while just six percent report no use of iterative development.

Minnesota, which is now under review by the state auditor both for its failed $100 million Minnesota Licensing and Registration System, also known as MNLARS, and its overall performance, is also seeking more modular procurement models.

Clyborne, a brigadier general who was appointed in January to fix MNLARS, said she “wishes” the legislature understood the funding challenges her office faces, and pointed out the natural tension between a state not wanting to raise taxes and the indispensable nature of information technology to support critical services.

“The biggest challenge for agencies is they want it inexpensive, they want it good and they want it quick. That’s really hard to do in state IT,” Clyborne said. 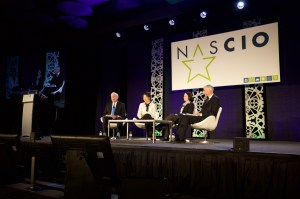