In a 67-page report released on Friday, New Hampshire’s Commission on Cryptocurrencies and Digital Assets made 12 recommendations urging lawmakers to take a proactive stance on creating new legal frameworks for blockchain technologies.

The recommendations included building out a pathway for cryptocurrency companies to obtain legal entity status and establishing a “Blockchain Dispute Docket” within the New Hampshire Superior Court.

The commission was established by an executive order from Gov. Chris Sununu in February 2022 to assess the state’s laws in governing crypto and other digital assets — and their impact on residents and consumers — and make recommendations to the state’s lawmakers on how to keep up with the evolving technology.

The final report was unanimously approved in December with two members voting in abstention because they work for state agencies that would be responsible for administering the potential laws that apply to crypto activities, such as the NH Department of Justice and the NH Bank Department.

According to the report, current regulations and treatment of crypto-assets in federal and state law are unclear. While stating that crypto presents unique economic and innovation opportunities, the report also cited blockchain’s involvement in unregulated markets and fraudulent activities, such as Sam Bankman-Fried’s mishandling of customer funds that led to the recent collapse of his crypto exchange and hedge fund, FTX.

“However, as demonstrated by developments throughout 2022 (including when one of the largest Crypto exchanges collapsed amid allegations that its founder and chief executive, previously one of the most prominent figures in the Crypto ecosystem, allegedly perpetrated criminal fraud resulting in the loss of billions of dollars of customer assets), applications of these technologies in real life, with real people, are subject to the same human frailties (greed, jealousy, arrogance, ignorance, incompetence, carelessness, naivete) that have plagued human communities for centuries; and for which an enormous body of laws has been developed over centuries,” the report read.

To counteract these potential pitfalls, the crypto commission recommended that New Hampshire take an enterprising approach to “build a better legal infrastructure for sound development of Blockchain technologies and its applications.”

“New Hampshire should be a leader with respect to supporting the development of sound Blockchain-based businesses and applications through enactment of clear and sound legal rules,” the report said.

The commission’s report laid out 12 specific recommendations. Along with giving limited liability legal status to crypto companies and creating a specific court for rectifying disputes, the report recommended providing resources to law enforcement for training that will protect consumers and investors.

To bolster the state’s attractiveness for the new technology, the report recommended the state establish a task force to evaluate how blockchain technologies could be used to improve current systems for filing and storing official government records, and enhance its communications infrastructure so it can support applications of blockchain technologies.

New Hampshire isn’t the only state or local entity considering how to rein in crypto and blockchain technologies — or make it more appealing to set up shop. In 2016, Illinois established a Blockchain Initiative that explored the possibility of using Blockchain in government. And Colorado, for example, is now accepting tax payments in crypto.

Some cities, such as Miami, are taking the blockchain integration even further, launching its own digital coin, MiamiCoin. Others, including Austin and Philadelphia, are eyeing the possibility.

In a press release, Sununu said he created the commission for recommendations that would “promote economic growth, foster innovation, and meet changing customer needs while ensuring safety, soundness, and consumer protection.”

“This report is comprehensive and timely, providing specific recommendations that would establish New Hampshire as a leading jurisdiction for the development of sound and effective applications of blockchain technologies, including proposals to clarify current laws and to support law enforcement in its efforts to protect New Hampshire consumers and investors,” Sununu said. 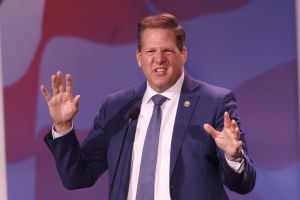