A group of engineers from the government software firm Tyler Technologies have revived a map showing the locations of emergency shelters and other free lodging in the wake of Hurricane Michael, which swept through the southeastern United States this week.

The map , which is designed for both desktop and mobile viewing, pulls the location and occupancy information of shelters from the Federal Emergency Management Agency that’ve opened since the Category 4 storm made landfall over Mexico Beach, Florida, and continued plowing a path of destruction over Georgia, the Carolinas and Virginia.

The storm has already been blamed for at least 13 deaths across five states, and could cause more than $5 billion in property damage, according to preliminary reports. Images of affected areas show whole neighborhoods flattened, roads torn up and communities piled up with debris.

The map was first launched last year after hurricanes Harvey and Irma struck Texas and the Gulf Coast, respectively, by Socrata, a government data firm that was purchased by Tyler Technologies in April. Elliot Flautt, the engineer who led the development of the original map, told StateScoop at the time the project was born out of concern for family members who lived in the paths of Harvey and Irma.

While pulling its information from FEMA, the Tyler map is also designed — unlike other maps that collect shelter information — to store the most recent update in case a government or American Red Cross server crashes, Flautt told StateScoop last year.

FEMA is not the only source for Tyler’s map, however. Along with government-approved shelters, the map also shows locations of Airbnb locations made available by the lodging company’s “Open Homes” program , in which property owners offer free accommodations to hurricane evacuees and inbound rescue and relief workers. Airbnb first launched the program in 2012 in New York after Hurricane Sandy. Currently, the map features clusters of green dots representing participating Airbnb units in Florida, Alabama, Georgia and the Carolinas.

The Tyler map is another example of the expanding role of geospatial intelligence systems in disaster response. Last year, North Carolina launched ReBuildNC, a data repository originally developed as a resource for people still digging out from 2016’s Hurricane Matthew. The site, which includes maps detailing recovery spending and relief services, was put into service again last month after Hurricane Florence churned through the state.

And earlier this year, the GIS giant Esri created a map showing updates from wildfires burning across California and other western states, including a “smoke forecast” showing that showed users fumes drifting across the entire country. 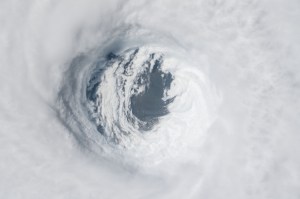