With a new police body camera program, a draft open data policy and a key piece of open government legislation currently under consideration, Washington, D.C., leaders believe they’ll be able to use technology to make the District’s government more open than ever before.

At Tuesday’s “D.C. Open Government Summit” — hosted by the National Press Club’s Freedom of the Press Committee and the D.C. Open Government Coalition — Mayor Muriel Bowser laid out her administration’s plans for embracing transparency through tech. While she detailed her work on a variety of open government initiatives, she noted that her most pressing task is educating the District’s workers about what they can do to keep careful track of their data and open it up.

“What I’ve found is that most people in the D.C. government want to do the right thing, but sometimes they need a little help,” Bowser said. “We want to get to a place where you don’t need to ask us for so much information, but we’re proactive about getting it out there.”

In the coming months, Bowser will be tackling the most politically charged element of this transparency push: the District’s police body camera program. The city has equipped some of its police force with the technology already, but Bowser hopes to have all of D.C.’s patrol officers wearing cameras by the “end of the summer.”

“We’re going to have such a rich set of data from those body-worn cameras, and we’re committed to studying how they affect policing,” Bowser said.

Bowser acknowledged that her initial stab at crafting a policy governing the technology would have restricted journalists, open government advocates and other members of the public from getting access to the camera footage.

But after conferring with other city council members and the D.C. Open Government Coalition, Bowser ultimately agreed to a compromise. Instead of shielding all footage from disclosure, now only video recorded in private residences or footage of incidents involving sensitive issues like sexual assault or domestic violence will be exempt from the city’s public records law.

“There’s a lot of voyeuristic inquires that we get,” Bowser said. “Bottom line is, I want people to be able to call the police and feel confident that the worst day of their life won’t be broadcast on the evening news.”

Despite her reticence releasing this type of data, Bowser pledged that the District is moving toward making the vast majority of its information publicly available, as highlighted by the new open data policy that would make data “open by default.”

Since releasing a draft version of that document for public comment via an online portal in January, D.C. Chief Technology Officer Archana Vemulapalli said her office has received roughly 300 comments on the policy.

Now, Vemulapalli said she’s working on engaging staff within city agencies about the policy, especially since it would mandate that each agency appoint its own “open data officer” to work with Vemulapalli to make information available.

“There are people that have responded, but a bigger group has a stake in this too,” Vemulapalli said. “So we’re reaching out to agencies and directors to ask them to read it, because I want to know, if I’m going to ask you to have a data liaison officer, what are your concerns about it?”

Since the policy would also install a new chief data officer under Vemulapalli’s purview, she said she’s asking CDOs in other major cities for input as she works to refine the responsibilities for the new data-focused executive.

Yet Darby Hickey, legislative aide to D.C. Councilmember David Grosso, pointed out that codifying the provisions of the open data policy into D.C. law would also be a powerful move. She noted that a bill co-sponsored by Grosso, the “Strengthening Transparency and Open Access to Government Amendment Act of 2016,” would do just that, and stipulate that all of the District’s many boards and commissions post the data generated by their meetings to a centralized portal.

The bill is currently awaiting a hearing in the council’s Committee on the Judiciary, though Hickey hopes it earns one “by the end of the year.”

Traci Hughes, the director of D.C.’s Office of Open Government, is a vocal advocate for the legislation, and noted that the city “would be the first municipality to include data as part of its local Freedom of Information Act” if the bill passes, instead of using “separate policy or legislation” to stress open data standards.

In the meantime, she’s hoping to follow Bowser’s lead and educate D.C. employees about the value of their data and “demystify” the subject matter.

“Once we get District government employees to the point where they’re not intimidated by data, we will have met our objectives of making government more transparent and more efficient,” Hughes said. 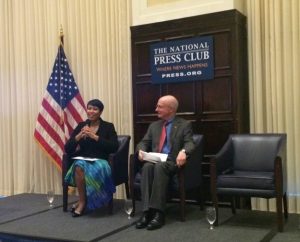