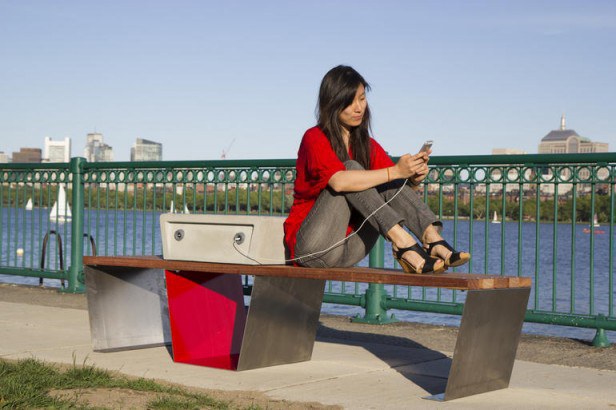 Boston will be soon getting new park benches that will let residents recharge their batteries in more ways than one.

Called “Soofas,” these park benches allow residents to plug in their mobile device and charge it using solar power it collects throughout the day.

The Soofa, an play on “smart urban furniture,” features a visible solar panel, a battery and two USB slots, into which bench-sitters and the desperately underpowered alike can plug in their smartphones and other devices.

“We want to make cities updated for our generation,” Sandra Richter, one of the three inventors of the Soofa, said in an interview with Yahoo Tech. “One trait we have is we run around with our phones all the time, and they die every five minutes. So for us it’s really important to be charged up all the time and be connected to each other.”

The high-tech amenity was first piloted in 2013 and has since been upgraded to include a larger seating area and the ability to plug in two phones simultaneously via USB.

In the future, Soofas may feature inductive charging stations similar to those being deployed in Starbucks outlets through out the county.

The Soofa isn’t just about phone charging: It also contains noise and air sensors embedded in the bench’s “brain.” Those sensors constantly collect data and beam it over Verizon’s 4G network to Soofa’s website, which will let people know where there is an available bench in a quiet location with fresh air.

by Ryan Johnston • 6 days ago
City

by Ryan Johnston • 1 week ago
City