Bloomberg Philanthropies announced Monday it will award 15 cities $1 million each to expand innovations developed in response to the COVID-19 pandemic this year.

The challenge is the fifth iteration of Bloomberg Philanthropies Mayors Challenge, which asks city governments worldwide to submit their best ideas to improve common urban issues, like public health, transit and climate change. This is the first year that international cities with populations of at least 100,000 can participate, the organization said, and each submission will be judged on how well it addresses one of several themes, including economic recovery, public health, the environment and good governance.

“Across the globe, mayors are on the frontlines of the COVID-19 pandemic,” former New York Mayor Michael Bloomberg said in a press release. “And as they continue to manage this unprecedented public health crisis, city leaders are finding creative new ways to deliver services while also rebuilding their economies in ways that tackle climate change and fight inequality.”

Applications for the challenge are due by March 21, and a committee of international technologists, public health experts and scientists, including Code for America founder Jennifer Pahlka, will select the 50 finalists and 15 grand prize winners of the challenge.

Finalists will receive coaching and data specific to their entries, as well as technical assistance and training to develop their ideas. At least 22 winning ideas from the past four Mayors Challenges — which have been held in the United States, Europe and Latin America and the Caribbean — have been implemented in cities after the competition, Bloomberg Philanthropies said. 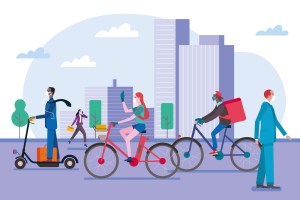