A state legislator in Texas introduced a bill last week that would prohibit wireless phone carriers from curbing download speeds for emergency responders responding to a disaster.

The measure, filed by Democratic State Rep. Bobby Guerra, recalls an incident last year in California, when Verizon was found to have “throttled” devices being used by firefighters responding to the largest wildfire in the state’s history after they went over their monthly data limits. The episode prompted a growing number of states to consider ways to make sure their first responders’ access to the internet during disasters is protected.

Emergency responders’ dependence on stable and high-speed internet connections in disaster zones was thrown into a spotlight last summer after a group of firefighters from Santa Clara County, California, found themselves cut off from potentially life-saving data streams and other mobile communications within days of joining the response to the Mendocino Complex Fire.

Days after arriving on-scene, the firefighters found themselves without the abilities to access potentially life-saving data streams and other mobile communications when Verizon cut off a mobile router that eclipsed its data limit. The router, located aboard a “command-and-control” vehicle the firefighters used to manage their deployments and movements in the firestorm, went from offering broadband speeds to “the point of acting more like an AOL dial up modem from 1995,” Santa Clara Fire Capt. Justin Stockman wrote in a June 29 email to a Verizon sales representative.

The firefighters’ struggles with Verizon dropped them into the center of the ongoing fight between states and the Federal Communications Commission over the FCC’s repeal of the 2015 Open Internet Order, which had implemented “net neutrality” rules including a prohibition on carriers throttling internet traffic.

Despite more than a month’s worth of pleas from the Santa Clara firefighters — and with the Mendocino Complex blaze still raging — Verizon only relented after Anthony Bowden, the chief of the Santa Clara County Central Fire Protection District, filed a declaration in a lawsuit brought by 22 states seeking to have the FCC reinstate its order. The company also said that going forward, it would lift its data restrictions on public-safety customers during disasters. The Mendocino fire eventually scorched nearly 460,000 acres before it was fully extinguished.

While typically not as severe as California’s, Texas has its own wildfire season. It also sits in the path of storms during the Atlantic hurricane season, including 2017’s Hurricane Harvey, which devastated the Houston metropolitan area.

Guerra could not be reached for comment. His anti-throttling bill is one of more than 100 pieces of legislation seeking to reimpose some form of net neutrality that have sprouted up in statehouses since the FCC overturned its rules, according to the National Conference of State Legislatures. 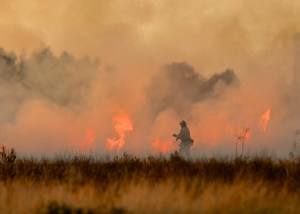