Some schools in Alabama are requiring students to bring their own computing devices. The move highlights a growing willingness by schools to embrace BYOD but leaves unanswered the question of how to help cover the significant cost to families who will have to purchase high-tech tools.

Students at St. Luke’s Episcopal School will have to bring either a laptop or tablet to class starting in the 2015-16 academic year, according to The Huntsville Times. The newspaper reported that officials of the west Mobile private school sent letters to parents of kids in sixth through 12th grade explaining the new requirement, which was first introduced as a pilot program.

Kids who already have their own devices can continue to bring them into school, but for those who don’t have anything, their parents were encouraged to buy Chromebooks, which run from about $220. They can also purchase MacBook Air laptops, which can run up to $1,100.

Technology director Duncan Cassidey told the Times that Chromebooks are “a natural fit” because the school already has a partnership with Google and uses the company’s apps.

Cassidey was not available for comment. It’s unclear how many students at the school would have to purchase their own devices.

While private schools can set their own requirements, Alabama public schools do not force parents to buy technology. However, 29 schools do have a BYOD program that encourages students to use their digital devices for educational purposes.

Susan Poling, technology coordinator for Shelby County Schools, near Birmingham, said parents were the main force behind the BYOD program about three years ago.

They began buying eBook readers and tablets for their kids, along with digital versions of books on required reading lists, “and were frustrated by the fact that we wouldn’t allow their child to bring the devices to school,” Poling told FedScoop in an email.

“They thought using the device would help their children in school in various ways — accessing content, taking notes, researching, etc.,” she added.

District officials lifted a smartphone ban and started allowing kids to bring them to school after realizing that disadvantaged families couldn’t afford tablets and laptops.

“Not allowing smartphone use as part of a BYOD program could create inequities in digital opportunities for students who are already disadvantaged,” Poling said.

Other unintended consequences of implementing a BYOD program include fewer disciplinary issues among students, and improved student safety since kids can better communicate with phones in school.

But there are also downsides, Poling noted — the schools have to constantly update their infrastructure, and new apps like Jott that allow kids to instant message without a connection to the Internet can be a distraction.

But for the most part, there are more pros than cons to allowing kids to bring devices to school.

“Teachers take a while to warm up to utilizing BYOD in their classes, but we are developing better professional development and classroom management training as our experience grows,” Poling said. “I think we’ve made great strides in these efforts and will be kicking off our best year yet with BYOD this coming school year.” 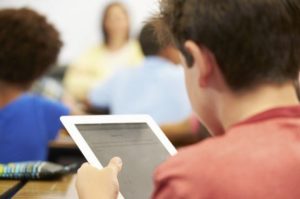