In Gary, Indiana, efficiency is driving the city government’s approach to “smart” technology, like internet-connected streetlights. But its mayor says she’s not letting the hype and flash of modern solutions get in the way of results.

Gary, Indiana, which is about 25 miles southeast of Chicago, serves just more than 80,000 residents, where Freeman-Wilson says the city uses its 311 platform as a way to deliver that efficiency for residents and city agencies alike. Using a 311 app tied to the city’s service-request platform, residents report their concerns to the city and can track the progress of their queries. Department heads also report their progress to the mayor weekly using data-driven dashboards fed by tools such as the city’s 311 platform.

The city is also beginning to deploy smart LED street lights, a technology being used in cities across the U.S. as the starting platform upon which other connected devices and data platforms can operate.

Freeman-Wilson, who will step down as mayor in December after losing the May 2019 primary race to Jerome Prince, sat down with StateScoop to talk about how she encourages technology within city government and the city at large.

StateScoop’s Jake Williams: How would you say you’re encouraging technology innovation — whether with smart streetlights or other similar technologies — within your city?

Karen Freeman-Wilson: We encourage that work by highlighting it. We also encourage smart-technology use by driving residents toward it. Like many cities, we have an older population, so we make it available through the traditional smart technology, whether it’s an app, whether it’s on our website, but we also allow them to tap in in a way that they’re accustomed to, as well, encouraging them to use the smarter technology, but acknowledging that we need to meet them where they are, as well.

Freeman-Wilson: We encourage the ecosystem and startup technologies by providing opportunities and making it easy for them to locate in Gary, so whether you’re talking about ArtHouse: A Social Kitchen, and the way they encourage entrepreneurship or whether you’re talking about our Gary Micro Enterprise, which is very open and encouraging to startups, we understand that it’s important that we provide a framework and a system for that to happen.

JW: It’s no secret that every day there are more and more challenges that city governments have to deal with. How do you see technology helping to solve some of those big city challenges?

Freeman-Wilson: When I think of the big city challenges and the issues that we’re trying to solve on a daily basis, I think that the most promising aspect of the use of smart technology and being a smart city is that it is cost-efficient. What mayor or councilmember or local leader does not want to save money?

This Q&A was conducted in September 2019 at Smart City Expo Atlanta through a partnership between StateScoop and Ignite Cities. 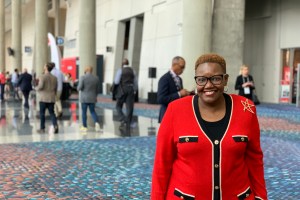