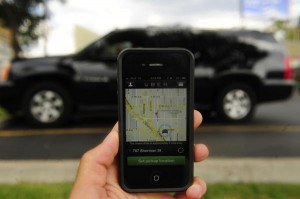 Uber cars in Philadelphia will be equipped with wireless Internet through Labor Day as part of a promotion with Google to attract people who want to work while traveling.

The project is still in an experimental stage, and Uber said users can expect sometimes spotty connections, but the service does allude to a future of Wi-Fi enabled car services in all of the nation’s major cities.

For now, those requesting a ride in Philadelphia can request a car enabled with Wi-Fi using the company’s mobile app. This option will provide individuals with a luxury vehicle that can seat up to four people and allow them to connect to the Internet to keep up with work or simply navigate the web.

Uber has noted that getting a car enabled with Wi-Fi could be tough during peak hours when they are in demand.

If this takes off, though, expect it to spread, as Google and Uber have a deep relationship.

Google Ventures led Uber’s $258 million financing round in August 2013. Since then, Google Maps has been integrated into Uber to enhance the user experience.

Roads in Phoenix crumble after 'cool pavement' treatment peels off