The city of Philadelphia has announced it will be the third U.S. city to install Link’s Wi-Fi connected kiosks around its city streets, behind New York and Newark, New Jersey.

The kiosks — developed by Intersection, a smart cities technology and urban design company operating in the U.S. and Europe — run on Link, which is a free public Wi-Fi platform. Each kiosk installed in Philadelphia — up to 100, according to the city’s concession agreement with Intersection — offers passersby free gigabit internet, phone calls, device charging and access to a digital dashboard of city services and commercial apps, the city announced Friday. Two 55-inch screens on each kiosk show digital advertisements, effectively paying for themselves, according to the city.

Eighty of the Philadelphia’s new kiosks will be in its city center, with the other 20 split among the city’s more suburban neighborhoods, according to Angie Dixon, director of planning at Philadelphia’s Office of Transportation & Infrastructure Systems. The city has worked with Intersection before — Philadelphia has been rebuilding and constructing new bus shelters with the help of the company since 2014. Dixon said that her office has been assisted by the city’s art commission and local businesses through the rollout of the first five kiosks, all of which are in city center so far.

Philadelphia’s kiosks will be sponsored by PECO, Pennsylvania’s largest electric and natural gas utility, which will advertise on the platforms. The city says it plans to generate additional revenue by allowing other businesses to purchase advertising space on the screen. 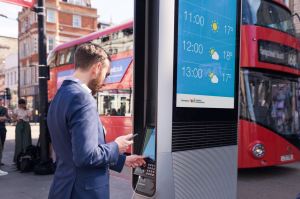