The Queens Gigabit Center uses the public Wi-Fi network run by LinkNYC, which is part of the CityBridge partnership that runs internet kiosks scattered around the city. Fraser told StateScoop those partnerships with were essential in the planning and execution of the Gigabit Center.

In addition to high-speed Wi-Fi, the Queens Gigabit Center, located inside a community senior center, will also offer digital literacy training and free access to laptops, tablets, computer workstations and other services, according to a news release from the New York City Office of Technology and Innovation.

“If you’re familiar with the proverb, ‘You give somebody a fish, they’ll eat for a day. You teach them how to fish, they’ll eat for a lifetime.’ Broadband is like the basics. It’s like water, right? It’s giving them access to water,” Fraser told StateScoop. “And what the Gigabit Center provides is it gets them access to devices and gives them the skills to use those devices, which are like fishing poles to feed themselves.”

According to the city, 22% of Queens households lack a broadband connection. But the choice to install the access point within a senior center was a conscious one, Fraser said. Throughout the pandemic, Fraser said the lack of digital access within the aging community became very apparent.

“So, coming out of that [the pandemic], we took a look across the city’s landscape, especially as the new administration took legs, to look at the digital divide to see what areas that were most impacted, and to prioritize closing that gap as quickly as possible,” he said.

The Queens location is the third Gigabit Center the city’s opened, with others already operating in Harlem and the Bronx. Two other centers are in the works for Brooklyn and Staten Island, the news release said. 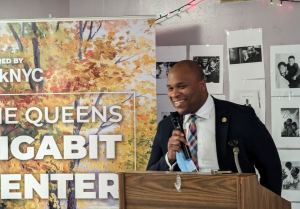