Riley, who has led North Dakota’s technology efforts since 2017, said blockchain has an “amazing” amount of potential applications in state government, though it can be difficult to explain its applications to people who aren’t familiar with the technology, thus making it difficult to build support for them. 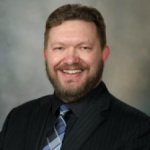 Riley recently began serving as an adviser to a cryptocurrency project launched by his brother, Patrick Riley, in an unofficial capacity, though the CIO said he’s mostly on board to assist with the entrepreneurial side of the business. But the experience is helping him to learn about what he called blockchain’s “immense” opportunity to transform state government operations, Shawn Riley said.

“To be able to have a blockchain ledger that could track mineral rights so that you have immutable data that can be seen over the decades — that’s a hugely helpful technology,” Riley said. “There’s a lot of cool things around that that can be done when it comes to managing some of the new aspects of virtual drivers’ licenses — that would be another thing where there’s a lot of possibilities there.”

Riley said land and mineral management is one enormous issue in North Dakota that blockchain could help simplify, though the state has other needs he suggested that smart contracts — agreements stored inside a blockchain that automatically verify transactions — and NFTs, digital assets bought and sold on a blockchain, could fill as well. He suggested that data from the state’s drone research could be managed on a distributed public ledger, while state-run arts programs could issue copies of pieces in their collections as NFTs to make them more accessible.

Many state governments before North Dakota have researched and even experimented with blockchain technology, but state CIOs told StateScoop last year that few of those efforts yielded tangible results. Riley said the idea of state-run blockchain councils or committees is a solid start to understanding the technology, but it’s not enough to propel it forward.

“Great idea, love the idea,” Riley said. “But you have to have something people can touch.”