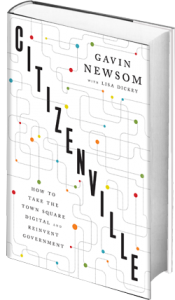 As part of the launch of his newly-published book, Citizenville, California Lieutenant Governor Gavin Newsom wants public leaders and civic innovators to commit to a “Government 2.0” challenge and help reinvent government through technology.

“There is huge potential to use technology to transform the way government and citizens interact, communicate and solve problems. During my seven years as mayor of San Francisco, I learned firsthand how important it is to have local government committed to driving this change. We are challenging local leaders across the country to push the boundaries of innovation to advance government to work for the citizenry of the 21st century,” said Newsom in a prepared statement.

The title plays off the popular farming simulation social networking game FarmVille, but in the book Newsom writes that Citizenville is “more than just a game; it’s a new way of thinking about the relationship between people and their government. It’s a world in which the old one-way, top-down, bureaucratic, pre-Internet hierarchy is replaced by a truly democratic, bottom-up, social civic engagement. Citizenville is the true implementation of Government 2.0, where the solutions are, increasingly, in our own hands.”

Newsom discusses Citizenville in this video:

A three-stage approach to digitizing documents and workflows

by StateScoop Staff • 2 days ago
Modernization

by Benjamin Freed • 3 days ago
Modernization