Chicago’s chief data officer, Tom Schenk Jr., is stepping down from the role after nearly four years for a private-sector job, the city’s chief information officer, Danielle DuMerer announced Thursday. Schenk is leaving city government to be the director of strategic insights at the auditing firm KPMG.

Schenk joined the Chicago city government in November 2012 as its director of analytics and performance manager, a position he held onto after becoming the chief data officer in late 2014.

As the city’s CDO, Schenk’s highest-profile project was the creation of the website OpenGrid, a data portal that allows users to map municipal datasets including crime statistics, restaurant health inspections, building permits, transportation information and calls to the city’s 311 phone line. The portal, which is also open to independent developers, has also been credited with the creation of websites where Chicagoans can look up whether their cars have been towed and when their streets will be cleaned next .

Schenk also held weekly meetings and conference calls with developers interested in new features, help on their own data projects or just pointing out bugs. While OpenGrid and the regular meetings were a good way to keep connected with Chicago’s developer community, Schenk said last year he envisioned the data portal reaching a more general audience.

“It’s harder to connect with those casual users who are not necessarily the most data savvy, who really are relying on the data portal just to find out some basic information about their neighborhood, about what’s happening around them,” he told StateScoop last year.

Schenk also helped launch of Chicago’s “Array of Things,” a network of street sensors that monitor environmental conditions throughout the city. The project installed its 100th node last month . 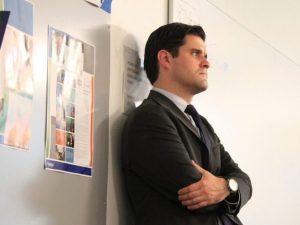