State legislatures saw an explosion in the number of bills introduced involving body cameras for police officers in 2015, according to a StateScoop analysis of legislative activity, using a database developed by FiscalNote.

The database shows that lawmakers in 30 states and the nation’s capital introduced 84 bills over the last year, compared to the nine introduced in four states and Washington, D.C., in 2014.

However, a relatively small number of the body camera bills put forward actually ended up becoming law — only 14 were enacted this year, while just one became law last year.

Even still, the results reflect a sharpening focus on the issue in 2015, as police shootings entered the national spotlight.

No state was able to pass one of several bills that would have required police officers to wear body cameras — instead deferring the decision to cities and counties. The bills that did go through authorized states to study the issue and craft universal policies governing body cameras. 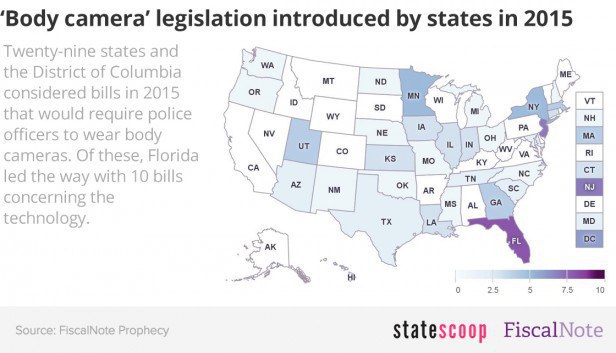 Arizona and Maryland successfully created study committees to investigate the issue and deliver recommendations on the technology to lawmakers.

In a similar vein, Massachusetts appropriated $250,000 for its Executive Office of Public Safety and Security to hand out grants to municipalities looking to run body camera pilot programs.

North Carolina did little in 2015 to address how local police would use the technology, but the state did enact a law requiring agents with its Wildlife Resource Commission to wear body cameras while on undercover operations.

Two of the bills that passed this year specifically addressed how public records law governed the footage produced by body cameras — Illinois and Florida passed bills exempting the footage from their open records laws in various situations.

The intersection of government transparency laws and body camera regulations was an especially prominent topic in 2015. Of the 84 bills introduced on the subject, 33 contained provisions governing how the public could access body camera footage.

Specifically, 17 of those bills sought to keep the footage from being released in the vast majority of situations.

Lawmakers in Kansas were especially interested in crafting exemptions for the footage. A bill introduced in January would have required that any recording “made and retained by law enforcement using a body camera or vehicle camera shall be confidential and exempt from the open records act.” Legislators also introduced two other bills that contained a similar broad exemption, but that did allow for some situations where the subjects of the recordings could access the footage.

Lawmakers in Missouri and Louisiana also introduced bills that would let law enforcement agencies withhold disclosure of footage in almost any situation. Even the South Carolina bill named for Walter Scott, the unarmed man whose filmed killing at the hands of a police officer prompted murder charges, contains a provision stating that body camera footage is “not a public record subject to disclosure.”

Other legislators were interested in shielding footage if the recordings happened in a private place.

Two bills introduced in Minnesota contained provisions keeping footage collected by police “in a space or at a location where a data subject is presumed to have a reasonable expectation of privacy” classified and only able to be released “pursuant to court order.” Lawmakers in Washington, Utah and North Dakota put forward similar proposals.

All of those provisions stand in direct contradiction to a white paper compiled by scholars at Yale University’s Law School, which argues for body camera footage to be treated the same as any other public record. The researchers also assert that lawmakers don’t need to introduce bills to address the issue, as the footage could be covered by all the same exemptions and standards already created for law enforcement records.

However, many bills introduced were indeed aimed at preserving public access to body camera recordings.

A bill proposed in Washington, D.C., lays out specific procedures for police for handling Freedom of Information Act requests for body camera footage, as well as provisions allowing members of the public to view footage at police stations in some situations.

Another piece of legislation introduced in Illinois this month would prevent agencies from withholding any “recordings of a law enforcement officer discharging a firearm or an officer-involved death,” unless they earn a court order allowing them to keep the footage confidential.

Four different bills in New York sought to keep body camera footage from ever being classified as “personnel records,” which could be withheld from disclosure, but did require that the recordings be redacted or blurred in some instances to preserve the subjects’ privacy. A bill in Mississippi also would have provided for the release of footage if redaction was “feasible.”

How autonomous-vehicle companies and cities have learned to work together