The State of Utah has big plans to build on its investment to centralize identity and access management, for both employees and citizens.

Leading Utah’s efforts is its chief technology officer, Dave Fletcher, who estimates that deploying a centralized identity and access management (IAM) platform has already saved the state up to $15 million. 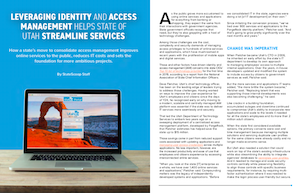 The savings came in part from reduced costs associated with updating hundreds of applications used in state services. The state’s IT department has also reduced the costs of managing user access credentials across multiple applications.

Consolidating IAM systems into a single platform also improves the user experience of citizens accessing online services. That in turn is positioning the state to take on more ambitious projects in the future, such as unifying the state’s health and tax department systems, said Fletcher in a new report, produced by StateScoop and underwritten by ForgeRock.

“When you look at the state [IT] enterprise as a whole, we have over 1,400 online services and applications,” says Fletcher, explaining how the efficiency of a centralized IAM approach allows the savings to scale.

Prior to consolidating IT management in the state more than a decade ago, Utah’s agencies were doing most of their IT development on their own, including how applications managed users’ access to state-supported applications.

“Utah’s experience is a very familiar one when it comes to identity and access management,” said Jeff Brooks, regional vice president, public sector, at ForgeRock in the report, “Leveraging Identity and Access Management Helps State of Utah Streamline Services.”

“Agencies spent the past 15 years cobbling together different technologies mostly to serve internal IAM needs. Then as consumer identity requirements grew, organizations had to try to extend those systems to support expanded environments or invest program by program. That greatly increased costs, cyber risk and time to value adding new applications,” he explains.

However, since Utah has begun the conversion process to a centralized approach two years ago, it has tied more than 900 services and applications into a single IAM system, using a platform supplied by ForgeRock.

According to Brooks, ForgeRock’s Identity Platform operates on an open architecture which makes it easier for large enterprises to integrate into more complex infrastructure. With only one system to download and deploy, IT departments are better equipped to adapt to changing needs.

Fletcher says the ease of integrating applications and IT services into ForgeRock’s solution has emboldened the state’s IT team and state officials to take on more ambitious plans moving forward. Looking ahead, the state wants to expand the use of ForgeRock’s IAM solution to support user access for larger and more sensitive state services, including Utah’s health and tax department systems.

“It wouldn’t have previously been possible to easily connect a citizens’ birth certificate, immunizations records and other health care data in a uniform way without first connecting a centralized identity system,” Fletcher says in the report. That’s changed having a foundational, centralized IAM platform in place.

Listen to the experts discuss how Utah and Texas are both leveraging modern IAM solutions to reduce their IT operating costs and improve identity security.

Read more about how Utah integrated a modern, centrally-managed identity and access management platform, lowering IT costs and improving the user’s experience.

This article was produced by StateScoop and sponsored by ForgeRock.