Building smarter and more sustainable communities often means tackling intractable issues with fresh new ideas. Trying to solve 21st century problems with 20th century solutions — which is often the case in cities — isn’t going to cut it for much longer.

Discovering and bringing forward new ideas is what urban innovation is all about. It’s at the center of any smart-city strategy. All of us engaged in the work to build better communities know this is hard. The reasons why successful urban innovation is elusive are varied, but one core dimension stands out among them all: Urban innovators are often tasked with building solutions for a world that largely doesn’t yet exist.

In my 30-year career, the greatest rewards have come from game-changing efforts, projects that resulted in a vastly improved government experience, reduced costs or — at best — radically improved lives of a large number of people. These outcomes in public service are rare and difficult, so achieving them is particularly noteworthy. Successful urban innovation is the prize for anticipating the future.

Urban innovation is all about creating and delivering new value. It’s about thinking differently. Assumptions must be put aside. We must combat our own biases. Limitations have to be rethought. This is all difficult because if we innovate purely for a problem that exists in the context of today, we ignore the inevitability of progress. And in the third decade of the 21st century, it’s fair to say progress and change is more rapid than at any time in the past.

In trying to solve transportation issues, for example, does it make sense to invest heavily in technologies related to traffic signals when a future of self-driving vehicles will have no need for these types of physical cues?

Urban innovation is hard because we’re building for a future urban world that is speculative and likely full of unanticipated surprises.

At the heart of successful urban innovation are risk-taking and boldness. City leaders and staff have historically shied away from both. Unlike the most innovative organizations in the private sector, where failure is seen as essential to learning, failure in public service can be career-limiting and humiliating.

There’s no quick fix to this challenge. Communities want all the benefits of urban innovation, but without the risk. These contradictory qualities seldom coexist. The most successful organizations take big risks and sometimes fail, but they often end up providing better products and services.

The most innovative cities in the world — currently a rather small, elite group — share these qualities of risk-taking and boldness. They’ve recognized that to get the results necessary to prepare for an unknown future, they’ve had to change their approach.

A larger group of cities trying to be innovative has focused on approaches such as carefully managed experimentation, deploying innovation labs and building innovation districts. These are good and often do result in greater urban innovation, while limiting risk. But I see these as stepping stones to eventually embracing risk-taking and boldness as core cultural qualities that can help build the cities of the future.

Like so much of the work ahead, smarter and more sustainable communities require us to do things differently. If we can’t agree on that, progress and results will remain elusive.

Jonathan Reichental is the former chief information officer of Palo Alto, California. He’s now an instructor at several institutions, including the University of California, Berkeley, and online through LinkedIn. He’s the founder and CEO of the advisory and investment firm Human Future, and the author of Smart Cities For Dummies. He also publishes a regular newsletter. To receive it free in your inbox, sign up here.

Dr. Reichental’s new book, Exploring Smart Cities Activity Book for Kids, is out now. You can purchase it here. 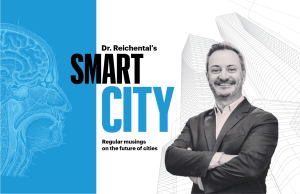