Having published its recognizable, yellow-covered reference guides on computer programming, investing, politics, wine, bird watching, life coaching, flirting, adrenal fatigue and about 2,500 other topics, Wiley finally got around this year to a “Dummies” volume about smart cities.

Written by former Palo Alto, California, Chief Information Officer Jonathan Reichental, “Smart Cities For Dummies” is a 369-page primer predictably ranging from the importance of deploying a strategic plan to the many emerging technologies from which the “smart cities” brand derives its name — autonomous vehicles, drones, blockchain and internet-connected street lights. 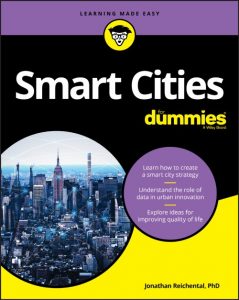 But Reichental explains in the introduction his intent to write an “action-oriented” book that doesn’t dwell on abstract concepts but relies on practical examples. From a brief detour back to the First Industrial Revolution to a concluding section called “Making a Better Tomorrow,” that aspiration is laced through the chapters as he outlines how new technologies can be pit against massive societal challenges like climate change, poverty and inequality.

“Human destiny is tied to cities,” he writes. “If we’re going to have a happy and prosperous future, we need new ideas, skilled talent, and informed leaders to build the cities of tomorrow. Everyone deserves a good quality of life. This book can help make that happen.”

In an interview with StateScoop, the author shares more about what’s in the book, who it’s written for (everyone) and why he believes smart cities are so important.

Do you think there is a broader audience for a book about smart cities, beyond people who work inside city governments?

I don’t think a lot of people have had literature that they felt was accessible, and because the Dummies brand is so huge, I think it does allow more people to inquire or kind of visit a topic that they normally wouldn’t. People are genuinely interested in their city. One of the lines I have in the book is: “Ask a person what they think about their city and the person will tell you.” People won’t hold back. They also don’t understand how their cities work, and this does open the curtain a little bit and let people peek behind the scenes and see how things operate. I’ve been really surprised that families are interested, and I’ve heard lots of cases where the kids want to read it first because “smart cities” is such an intriguing title. A 12-year-old girl I heard about, she grabbed it from her dad and said “I want to read this first.” That’s the most flattering thing in the world.

Is this book suitable for city officials who already consider themselves knowledgeable about smart cities?

For city CIOs, I think this is a really good book for them because it’s comprehensive. A city CIO might be really good at cloud computing, and cloud computing’s in the book, but maybe you’re curious about the “internet of things” or wireless technology or Hyperloop. Even as someone who’s been in this space 10 years, I still learned a lot of stuff as I was writing it. A city is such a broad canvas of different challenges that you can know several and you can be good at several, but it’s hard to be good at all of it or understand all of it, and this book is my attempt to sort of bring it all together.

The first chapter stood out to me because it has some history on cities, going back to the first city and then through the technological revolutions. Why did you decide to start there?

I had a nice discussion with the publisher about this. Dummies books don’t typically go into things like history, they like to get right to the point. And I made the argument that you can’t really understand our cities if you don’t understand the backstory because most of what we see right now is the result of trends. I’ll give you an example: streetlights. They’re ready for upgrading because street lighting infrastructure is old. We’re putting new light bulbs in, some of our street lighting is solar powered, they have power and they’re stationary so they’re great for other sensors. So what’s the history there? By going deep into the history of that, it helped me understand how we arrived at today, why we have some challenges and potentially on how you solve them in the future.

Is there anything about smart cities that people get wrong?

People think intuitively this is a book about technology, that smart cities is about software and hardware and data. The topic in my view is much broader than that. We’re talking about how you can evolve and change cities to be a different place for encouraging a better quality of life. I don’t need to get into the more technical side of things like how to build APIs so cloud services can talk to each other. Most people working directly in our field don’t care. What they care about is can their environment be more beautiful, quieter, can the air be cleaner, can the energy be lower cost?

One of the things I like about this book is its optimistic message. You return to the idea repeatedly that cities are machines that can be improved to in turn improve the lives of the people who live in them, which is increasingly more of us.

I’m not shy in saying that I’m an optimist. There’s a lot to be concerned about, but if you look at the history of humanity, we’ve overcome famines and droughts and diseases and world wars. We’ve gone beyond those and actually prospered. So even though we face some dramatic challenges in the future, I’m more optimistic that we have the ability at the end of the day to confront them and win.

But I am also very sober in the book. It is about a better future for all of us, but I’m not so very sober in terms of the climate crisis, how terrifying that is if we don’t address it, energy, transportation continues to be a phenomenal challenge all over the world. The areas where we have difficulty, I don’t paint a glorious rosy picture of our current state or where we’re trending. I’m saying we have to do the following things if we want to combat them.

Jonathan Reichental is the former chief information officer of Palo Alto, California. He’s now an instructor at several institutions, including the University of California, Berkeley, and online through LinkedIn. He’s the founder and CEO of the advisory and investment firm Human Future, and an author.

by Ryan Johnston • 2 days ago
City

by Benjamin Freed • 3 days ago
City