After nearly six years as the top technology official in North Dakota, Chief Information Officer Shawn Riley announced earlier this month he’s stepping down in December to take over as CEO of American operations for cryptocurrency-mining and energy-development company Bitzero International.

At Bitzero, Riley told StateScoop, he’s eager to continue what he described as a career throughline of “making the world better for people.” In North Dakota, Riley oversaw drastic changes to the IT department’s responsibilities not only within the state government but across the state, particularly in defending against cyberattacks and launching education initiatives.

“We completed all kinds of things that I was told over and over again cannot be done in government,” Riley said in an interview for an upcoming episode of StateScoop’s Priorities podcast. “I was told by all sorts of people how impossible it is to change education, how impossible it would be to bring cities and counties and schools and universities together for cybersecurity. I was told endlessly it was impossible to work remotely.”

When Riley joined the North Dakota Information Technology Department in 2017, the state’s cybersecurity team consisted of three full-time employees, he said. Today, there are 51 employees with an operational budget that’s grown by $70 million.

“Today we have one of the largest defense perimeters in the entire country,” Riley said. “We defend 252,000 users every single day, hundreds of thousands of devices behind that. The state that used to have the IT department under one cybersecurity perimeter now has the entire executive branch, legislative branch, judicial branch, higher ed, K-12, cities and counties all in one cyber shared service.”

Riley pointed to the North Dakota Information Technology Department’s work building the nation’s first interstate cybersecurity operations center, which today includes 11 states and one tribal nation. He lauded the efforts of more than 40 education and government entities across the state joining to make computer science and cybersecurity education available at every grade level at every school in the state.

“It’s a huge leap in where we were to where we are and where we can possibly go in the future, because this doesn’t have to be a North Dakota story,” Riley said. “This can be an American story. This can be every single state has computer science and cyber science kindergarten through Ph.D.”

At Bitzero International, Riley said he’ll work on zero-carbon displacement and energy reuse. The company is currently converting a former anti-ballistic missile site in northeastern North Dakota into a cryptocurrency mining center. Riley said he believes the company’s technology can “benefit all of our children, give us a cleaner nature and cleaner environment.”

“It’s a collection of technologies that are helping us to be able to bring things like data centers off of black energy into green energy, helping us move things into a place where putting electricity into a data center and simply getting waste out of that in the form of heat that that heat can be recaptured again into other sources,” he said. “Could be greenhouses, could be fisheries, can be drying corn, but it’s effectively making data center technologies vastly more efficient than what they have been in the past and vastly more effective from an energy standpoint.”

But his ambitions don’t end with Earthly concerns. Asked over Microsoft Teams about a Mars poster on the wall behind him, Riley said he’s “been a Mars guy forever.” 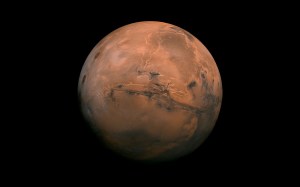