Alaska is in the midst of an unprecedented effort to connect its far-flung rural inhabitants to the internet. A major piece of a $250 million broadband project was completed last year by Anchorage-based internet company Quintillion that now brings modern internet connectivity to areas that have never had it before.

For many residents, businesses and government bodies it means new opportunities. After returning from a three-day trip to the most northern region of the state last week, Alaska Chief Information Officer Bill Vajda shared with StateScoop his impressions of how the new connectivity is being received and what it could mean for the state’s future — technologically, economically, and culturally.

StateScoop: Are you back?

Bill Vajda: Yes, I’ve been back about four days.

So, you were up there looking at the new infrastructure?

Quintillion laid in a cable from Kotzebue all the way around to Utqiagvik and we went up to take a look at that because from Utqiagvik it connects to fiber installation at Prudhoe Bay and runs down to Fairbanks. So really for the first time ever, there’s a full fiber run from north to south in Alaska. Before that, if you were in the North Slope, north of Prudhoe Bay, the only options you had for connectivity were satellite connections.

Were you using the internet yourself or just looking at the infrastructure in the ground?

Yeah, actually both. I had an opportunity to tour the new facilities supporting the undersea cables and then the connections into the terrestrial fiber infrastructure. I had an opportunity to take a look at how broadband is being implemented in the community, what organizations are the early adopters and what the impact of the newly-available capability has been on the governor’s priorities.

And then also to take a look and see what other opportunities might be out there. Because in Alaska where you’re typically so focused on solving the middle-mile problems — looking at how communities can also take advantage of these things for their last-mile support was also one of the things on the agenda.

Just as an example, I had an opportunity to tour the BARC, the Barrow Arctic Research Center, and I got a chance to hear how the availability of this new connectivity is greatly enhancing arctic research and environmental science research in the area. They’re able to put different new kinds of Internet of Things scientific research centers into places that they weren’t able to before and they’re able to maintain 24/7 connectivity.

If you’re a team from Texas, for example, you might be able to put undersees sensors in places that monitor the sea and have that data livestreamed to you in Texas actually in an affordable way, where previously the expense of providing that kind of connectivity might have been prohibitive.

Not to undersell the importance of this, but I imagine it’s not a lot of people being reached. Is that right?

Correct. It’s a very small demographic, relatively speaking. You’re looking at an area of mountains and tundra that’s as large as two Texases with a population of about one person or less per square mile.

The Quintillion project was completed last year about this time, but really the connectivity and the full fiber connections weren’t largely utilized except within the last six months or so. It’s literally a 25-fold performance increase [in connection latency].

Did you get a chance to talk to any of the people using the new internet service?

Did you learn anything from those conversations?

Yeah, absolutely. It was very eye-opening and there were some things we kind of predicted. You can imagine in that landscape, energy conservation is critical, so there’s a decided preference for mobile devices because they consume less energy. And that implies then mobile computing delivery of services and all the attendant infrastructure you might have there.

There’s still a fair amount of competition even in the local area for commercial providers for ISPs, but with the introduction of some of these new capabilities, it gives not only an opportunity for more competition to enter the area, but it also gives the communities and opportunity to rethink maybe how their connectivity might work.

There are a lot of people excited about being better connected. Alaska fully embraces and does better than anyone else at embracing first-nation cultures, both for preserving that culture but also honoring and respecting the decisions that contemporary tribal nations make. Many of them want to, of course, preserve their cultures, but enjoy the benefits of modernity, too, as they pick and choose.

It’s interesting because you can see the community centers, the museums, the research centers, the local governments, whether it’s the police departments, fire departments, or the school districts, or some of the local offices there, the hospitals, all evaluating what the potential opportunities are to get connected in a far faster way.

For state government services especially, how is this new connectivity changing things for people?

Apart from provisioning and how we think about things from the capital, as an infrastructure capability for the area, what are the appropriate economic development incentives, what are the appropriate technology incentives to try to expand the adoption of it? In the past, part of the constraining factor with technology adoption was clearly economic — it’s a small population and from a commercial standpoint may not be the most economically attractive area. Now that the investment is there and the capabilities are there, what incentives beside program delivery might come to bear on future decisions?

Gov. Walker has rolled out the EducationSuperHighway initiative , he’s very interested in getting all the K-12 schools connected on broadband to ensure that we’re making the most of the state of tele-education. He’s very interested in improving and expanding on public safety and has initiated a public safety initiative to ensure communications and delivery of public safety services are managed in a modernized way, including better coordination and more effective communications. There’s an interest in the rural health and telemedicine. There’s an awful lot of activity in that space right now and as these first adopters come online and take advantage of this improved connectivity and how well that works, how well it doesn’t work, and how to fill that next set of gaps is really what our focus is becoming.

Do you have a favorite moment from your trip?

I have a few. One was we were greeted by Inupiaq Eskimos. We were welcomed into a community center and it had all the elements of the trip in one shot. There were dancers and it had a smart TV connected in the background. So you had the traditional culture and you had the modern culture and you had the drummer’s child who was paying as much attention to the dancers as we were. And you could imagine the struggle if you were a little baby of trying to reconcile all these things. You’re part of an oral tradition that spans 15,000 years of culture and you’re standing in a western-style building with a smart TV that’s fundamentally linking you to the West and to the future. 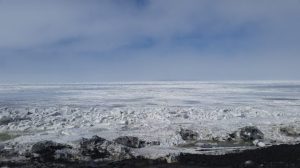