The state of Hawaii has saved big by moving towards a paperless government, already shaving off one million sheets of printer paper from its operations in just six months.

Hawaii Gov. David Ige first began advocating for state agencies to wean off paper usage in 2015, and early this year, the state kicked off a six-month paper-reduction program to work towards this goal.

From January to June this year, nine state departments took part in the paper reduction pilot program, led by the Office of Enterprise Technology Services, or ETS.

And in just six months, ETS announced yesterday, program participants have reduced paper usage by 20 percent as they transition from printed to digital documents.

“In any transition, one can always anticipate challenges,” Hawaii Chief Information Officer Todd Nacapuy told StateScoop. “However, we believe it’s important that employees migrate from traditional paper-intensive processes by adopting digital technologies that create efficiencies within state government to maximize the return on investment for every tax dollar spent.”

Hawaii implemented an eSign initiative, which allows employees to get documents signed electronically. As the government digitized how it has historically done much of its business, Nacapuy said, “we experienced a cultural shift in the way employees viewed printing paper.”

This is just the beginning, Ige said, as the state transitions into completely digital, paperless operations.

“Transforming from a paper-dependent culture to a digital environment improves public accessibility to government documents and increases transparency for our citizens,” Ige said in a press release .  “Electronic documents make it easier to store and retrieve documents.”

In addition to saving paper, the state says the initiative will help departments cut costs. In three years, the state estimates, it is projected to save $500,000 and 10 million sheets of paper.

In 2015, Ige noted that the state goes through about 12 million pages a year. Last year, more than 4 million sheets of paper were used.

Hawaii has already cut back paper use by 20 percent in 2018, saving one million sheets of printed paper in six months. As the state widens the program to additional agencies and continues to whittle down its paper usage, Hawaii officials say they will continue to cut down on the sheets of paper used by the millions.

“The program showed considerable progress by eliminating many backend reports and converting hard-copy paper reports to electronic documents (PDF) to reduce storage requirements, facilitate sharing of information, and reduce paper use,” Nacapuy said. Nacapuy said he is optimistic about the future of the program and that “expanding the adoption of digital documents helps government improve communications with its constituents across all islands.”

This story was updated shortly after publication to clarify that one million sheets of paper had been saved after six months, not one year. 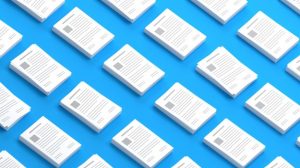