Frustrated by the federal government’s moves away from combatting global climate change, California Gov. Jerry Brown said Friday his state intends to launch a satellite into space to monitor pollution. Brown announced the project in San Francisco during his closing remarks to the Global Climate Action Summit, a three-day conference that drew thousands of elected officials, scientists, activists and donors.

“We’re under attack by a lot of people, including Donald Trump,” said Brown, who has been one of the U.S. president’s most vocal critics among the country’s governors. “But the climate threat still keeps growing. We’ve got to know what the hell’s going on all over the world, all the time. So we’re going to launch our own satellite — our own damn satellite — to figure out where the pollution is and how we’re going to end it.”

In a press release shortly after Brown’s brief speech, the governor’s office said the state is partnering with Planet Labs, a San Francisco geospatial imaging firm that programs and launches small satellites to survey the planet. The company, founded in 2010 by former NASA scientists, has put about 150 satellites into orbit in partnership with business and government clients, including the National Geospatial-Intelligence Agency , with which it has a cooperative research and development agreement.

Brown said the satellite will be able to detect methane emissions and other pollutants linked to global climate change, and create publicly available datasets that could be used in climate research. The governor’s office added that the satellite will also be able to pinpoint specific sources of pollution, potentially increasing the state’s ability to regulate greenhouse gas emissions.

California officials did not give an estimated cost for Brown’s satellite, though the program’s formal announcement states that it has received financial support from at least two private donors. The state expects more business and philanthropic supporters to chip in as the satellite’s development progresses.

There’s also no projected launch date yet, meaning the California satellite’s journey into space could be overseen by the state’s next governor, as Brown — once nicknamed “Moonbeam” — is due to leave office in January.

But a literally out-of-this-world effort to monitor pollution fits in with the final months of Brown’s term, which have been defined in large part by his feud with the Trump administration over climate and energy policy. California was among the first to join the U.S. Climate Alliance, a coalition of mostly Democratic-led states that formed in the wake of Trump’s decision last year to remove the United States from the United Nations’ 2015 Paris climate agreement. More recently, the state is facing a legal battle with the administration following the Environmental Protection Agency’s order last month revoking California’s long-standing ability to set its own car-emissions standards, which are more stringent than federal regulations.

The White House has also proposed eliminating funding for NASA’s Carbon Monitoring System, which uses satellites to track atmospheric emissions for data that can be used in climate studies.

With their satellite, California and Planet Labs announced they will make the environmental data the orbiter collects available to the public through a partnership with the Environmental Defense Fund. The Climate Data Partnership, as the program has been dubbed, will be designed as a “common platform” for collecting information from the California satellite and other sources. 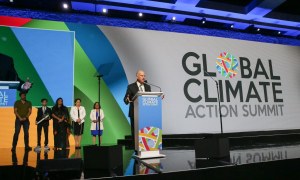