Pai, a former Verizon lobbyist, circulated the final draft of the Rural Digital Opportunity Fund among his fellow commissioners and announced that voting will take place at the FCC’s open meeting on Jan. 30. The $20.4 billion fund, announced last April, is expected to provide service to about six million homes and businesses over the next 10 years through a reverse auction in which telecoms bid to serve regions that lack access to high-speed internet.

Senior FCC officials told reporters in a call on Wednesday the fund will be dispersed in two phases so that funding will not be halted while the FCC updates its processes for mapping broadband coverage. In the first phase, to begin next year, the FCC will disperse $16 billion to service areas “wholly unserved” by broadband providers, an estimated 6 million homes and businesses. The second phase will use a new mapping process the FCC is calling “Digital Opportunity Data Collection” to target partially served census blocks.

“While we’ve made substantial progress in expanding broadband deployment over the last three years, the Rural Digital Opportunity Fund would be the biggest step the FCC has taken to date to close the digital divide,” Pai said in a statement. “This new fund would target rural areas across the country where residents currently lack access to adequate broadband and would deploy high-speed broadband to millions of rural Americans in an efficient and effective manner.”

The FCC has long relied upon coverage data arranged by census block, which can vary in size from a few city blocks to hundreds of square miles, leaving coverage gaps in rural, sparsely populated areas. When the FCC released its Broadband Deployment Report last May, this methodology drew ire from internet-access advocates and Democratic FCC commissioners Jessica Rosenworcel and Geoffrey Starks, who said it misrepresented the actual number of Americans who lack broadband access.

Pai confirmed in August that a new data-collection method will be soon deployed alongside the census block method. Digital Opportunity Data Collection will require carriers submitting data to the FCC to submit maps with polygonal outlines of their coverage areas and service speeds. 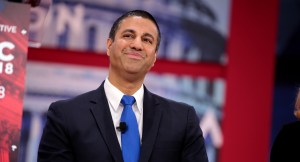