A month into the job, Detroit Chief Information Officer Art Thompson is busy promoting a citywide mapping initiative that he told StateScoop will increase the “ability for people to get their hands on GIS” and expand the transparency of government data.

The Detroit Department of Innovation and Technology is two years into a program called Detroit Street View, in which lidar sensors are strapped to the top of a sprinter van almost constantly navigating the city’s streets. Using the sensor, the van is able to collect 360-degree views, much how Google collects images for its Street View maps.

The difference is that Detroit is sharing the underlying geospatial data collected by the lidar sensors with the public in hopes of cultivating more data-fluent residents, Thompson said.

“We’re doing this to try to increase transparency and digital equity so that people have the opportunity to take this data and do something with it,” he said. “It’s not anything that we house internally and say, ‘Oh, this is ours and we’re just giving you a street view.’ We’re actually creating something where if you’re curious about [geographic information systems] and you want to go through and map out the neighborhood block and play around, we have a very robust data resource that people can play around with and do anything they want to.”

Detroit Mayor Mike Duggan appointed Thompson as citywide CIO last month after his predecessor, Beth Niblock, was hired by the Biden administration to serve as the top IT official at the Department of Housing and Urban Development. Previously, Thompson had been director of IT and cybersecurity for the city’s public safety agencies.

Niblock launched the program in 2019, and since then the lidar van has visited every Detroit street at least once per quarter. While the van is moving, the sensor uses lasers to create 360-degree images and 3D street views, which are then posted on the city’s open data portal. Residents can download raw GIS data, plot it onto a map or examine the street view as one would with Google’s platform, Thompson said.

Thompson said the city is also using the data to measure where improvements are needed, such as replacing a missing stop sign or fire hydrant, and to more accurately assess property taxes.

Over the next year, the van will also be outfitted with a new device to measure where 4G and 5G service is available throughout the city. The goal, Thompson said, is to “future-proof” Detroit, while closing its digital divide. The city plans to continue surveying streets for at least the next five years to keep visual records of its recovery from its financial downturns over the past two decades, Thompson said.

“This could be something where people could take data over the next five years we’re doing this and tell the story of how Detroit has rebounded and how it looks more cutting edge and that the investments everyone have made over the last several years are now visible,” Thompson said. “This isn’t the same Detroit that was here 10 years ago.” 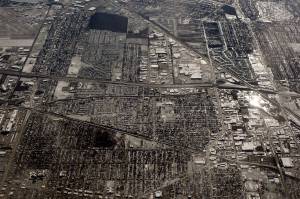