Washington Dulles International Airport last month became joined the ranks of U.S. airports where some travelers boarding international flights submit to facial-recognition scans before boarding their planes. Dulles, which handled about 7.7 million international passengers in 2017, is currently one of 14 airports around the country participating in a Customs and Border Patrol pilot project in which people flying to another country are only permitted to board after photographs taken at their departure gate is successfully matched with their passport or visa photos.

The new screening procedure, along with digitizing security processes, is meant to speed up boarding by freeing up gate attendants from manually reviewing every passenger’s passport.

But while other airports participating in CBP’s pilot program acquired screening technology from commercial vendors, the Metropolitan Washington Airports Authority, which operates Dulles and and nearby Washington Reagan National Airport, found that adopting the same scanning equipment would bust its budget by requiring entire physical reconfigurations of its gates. Instead, it turned to its in-house technology team to develop a more affordable solution that could be quickly deployed.

The result is a system airport officials are calling VeriScan, which is now in use at four Dulles gates operated by Air France, KLM, SAS and United Airlines. Since its Aug. 20 introduction, the system has processed more than 9,100 passengers on 38 flights bound for Amsterdam, Copenhagen and London, with a 98.5 percent match rate. And VeriScan, which looks like little more than an iPad-on-a-stick, could be coming to airports beyond Washington as MWAA attempts to sell the technology to its counterparts in other cities.

It’s also made Dulles a rarity among airports participating in the CBP pilot by introducing the system with multiple carriers. While CBP eventually wants all passengers departing or entering the United States to go through biometric screenings, how exactly to implement the new procedure has been left to individual airports and airlines.

At many other airports in the program, it’s the airlines taking the lead: Orlando International Airport, for instance, installed its first scanners just with British Airways ; Lufthansa was first carrier at Los Angeles International Airport to deploy facial scanners, beginning with flights to Frankfurt and Munich.

But in those instances, the airlines acquired the facial-recognition technology from vendors with which they had longstanding relationships. When it came to outfitting Dulles, MWAA Chief Information Office Goutam Kundu said he wanted to create a solution that could be used by any one of the airport’s 31 carriers.

“We noticed there was no cookie cutter approach,” Kundu told StateScoop. “The solutions from the industry required us to re-engineer our gates. They needed fancy gate control systems. There were too many moving parts and I was worried about managing operation expenses.”

Kundu, a former CIO of the U.S. Mint who joined the airport authority in 2013, turned to his MWAA Labs team, a group of programmers he hired to develop technology solutions to aviation-related challenges. One of its first products was an in-house bar-code-based mobile app for custodians at Dulles and National to keep track of restroom maintenance. It’s also created similar systems for electrical inspections and emergency notifications.

For facial recognition scanners, Kundu’s team realized that rather than bear the cost of customizing every gate to each airline’s specifications, it could build an adaptable solution from commercially available technology. The VeriScan system is essentially a 12-inch iPad mounted on a post, connected wirelessly to a cloud server where passengers’ photos taken at the gate are matched against passport and visa images in CBP’s database. Andrew Trull, an airport spokesman, said each setup costs about one-tenth of what it would cost to reconfigure an entire gate, but that it’s still designed to be flexible to individual airlines’ boarding processes.

“We did not want to dictate the boarding protocols to every airline,” Goutam said. The only hardware required where VeriScan is being used, he added, is a “power plug to charge each iPad, rather than equipment under the floor.”

Because the system is relatively light compared to other platforms, Goutam said it will be adaptable for arrivals as CBP deploys facial recognition scanning at entry gates.

“CBP has these biometric programs evolving,” he said. “We needed to have to be able to meet these requirements as they evolve.”

It’s also a potential moneymaker for MWAA, which has published marketing materials advertising VeriScan as the “quickest path to meeting U.S. Customs biometric exit compliance standards.” Pilot programs are already scheduled in Dallas-Fort Worth and Boston, Goutam and Trull said, with Tampa, Florida also interested in trying it. 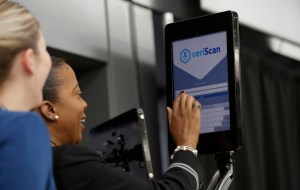 D.C. airports are selling their in-house facial-recognition system to other airports