Cities and counties are making progress in spending COVID-19 relief funds from the American Rescue Plan, according to a new joint analysis by the National League of Cities, the National Association of Counties and Brookings Metro.

Using the latest available government data, the report found that the 329 large cities and counties that received State and Local Fiscal Recovery Funds had by December 2021 allocated 40% of the $62 billion distributed over the first two years of the program.

Given that the Treasury did not publish its final rule on how local governments could spend the money until January 2022, that 40% figure — which represents a combined $25.3 billion — is in line with expectations, said Alan Berube, interim vice president and director of Brookings Metro. Berube added that at the time the data was collected, only half the $62 billion had been distributed — a second tranche of funding was made available in May 2022. The Biden administration also cautioned governments not to spend all their money at once, said Berube.

The money committed by cities and counties reflects their respective priorities and also their risk tolerance, Berube said.

“There are some places that saw the opportunities that the money could provide and said they would beg for forgiveness later. Other places were asking permission for all of the things they wanted to do out of concern that they might get audited and the funds recaptured,” he said.

Cities and counties differed significantly in their spending priorities and their approach to budgeting, Berube said. Cities were on the whole more aggressive in spending their dollars and were more likely to decide how they planned to spend their entire funding allocation from the outset, rather than waiting for the second tranche of funding to be delivered, as many counties did, he said.

Seven major areas of spending were identified in the report, including government operations, public safety, housing, economic and workforce development, infrastructure, public health and community aid. Government operations accounted for by far the largest share of city and county SLFRF dollars at 42% on average. Funding was fairly evenly distributed across the other six categories. Approximately 5% of funding was allocated for investments in government facilities, equipment or IT. Infrastructure funding, including ambitious plans to expand broadband access, accounted for 12% of allocations.

New data reflecting the first quarter of this year is expected to be published by the Treasury any day now, Berube said. He predicted the data will show that following the Treasury’s final rule in January, cities and counties will have finalized more of their spending plans and perhaps shifted their focus to longer-term projects. A tracker with details of governments’ project proposals was launched in February and updated earlier this month.

A number of counties, such as Frederick, Maryland; Pierce, Washington; and Seminole, Florida; used their American Rescue Plan funds to begin expanding their broadband infrastructure, laying the groundwork for more funding yet to come from the Infrastructure Investment and Jobs Act. Rather than using the SLFRF funding to invest in physical broadband infrastructure, some counties “leveraged these dollars to get smarter, hiring experts, engaging community groups and gathering intelligence,” Berube said.

While some jurisdictions are currently embroiled in court cases over their use of stimulus funding to cut taxes, Berube said most cities and counties needn’t be too concerned about being penalized for improper use of funds.

“If you’re going use the dollars re-seed a golf course in a high-income neighborhood, some enterprising journalist is going to come write a story about you,” he said. “And the Treasury Department will see that.” 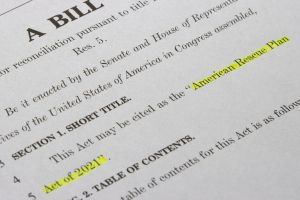