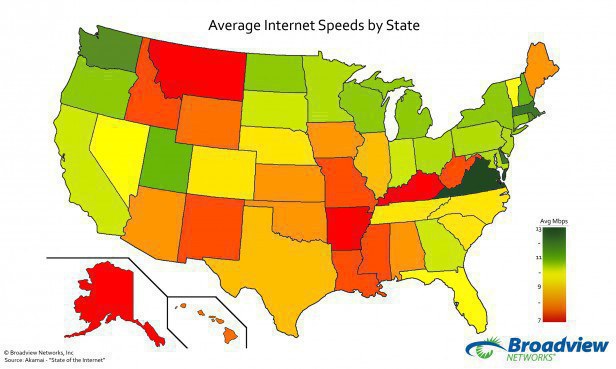 Virginia has the fastest average Internet speed in the country, according to a new study from Broadview Networks, while Alaska features the nation’s slowest.

Delaware, Massachusetts, Rhode Island and Washington, D.C., rounded out the top five, as the states in the Northeast region tended to feature some of the fastest speeds in the country along with those on the West Coast.

The Midwest states and deep South mostly lagged behind.

“Internet speed has been a hot topic in the news as of late, with major providers intentionally throttling speeds and the heated debate surrounding net neutrality.  It isn’t surprising that so many people are interested in the topic.  After all, the internet occupies much of an American’s daily life.  From work to pleasure, it’s seemingly everywhere.  But we all know that simply having internet access doesn’t cut it – the speed have to be fast and consistent.  We at Broadview Networks aren’t any different, we love fast internet as much as we love cloud phone systems.  That’s why we’ve decided to look deeper at the matter by exploring average internet speeds by state with this map.”

Virginia came in with an average speed of 13.7 Mpbs, which was calculated based on Akamai’s “State of the Internet” report released earlier this year.

No reason was given for Virginia’s exceptional speed, but it may have to due with the state’s abundance of data centers. Over the past two decades, the far-off suburbs of Washington, D.C., most notably Loudoun County, have become a hub for data centers.

Loudoun alone features 5.2 million square feet of data centers – approximately the size of 25 super Wal-Marts packed into 521 square miles. That concentration rivals Silicon Valley, the New York suburbs and the Dallas area for some of the densest in the country.

It’s been estimated that as much as 70 percent of all Internet traffic flows through Loudoun County data centers each day, according to the county department of economic development, giving Virginia residents close proximity to a massive amount of computing power.

On the other hand, Alaska residents receive just 7 Mpbs on average because of the state’s sparse population and harsh climate are not optimal for high Internet speeds.