Lawmakers in Texas will consider two bills that would shrink the state government’s two data centers and compel agencies to store their information on a cloud platform like Amazon Web Services or Microsoft Azure. The legislation was prompted by concerns that the cost of maintaining the two facilities has exploded over the past decade, and that lawmakers have not had oversight of how state technology officials awarded the contract to run the data centers.

One bill would require state agencies to consider cloud storage “when making purchases for a major information resources project,” according to the Texas Tribune, which first reported the legislation. The other would create a technology modernization account, with “transitioning [an] agency’s legacy information technology systems to a cloud computing service” being one of the only permissible reasons for an agency to access the new fund.

The two-year cost of operating the data centers has grown from $278 million to $489 million within a decade, according to the Texas Tribune.

Texas’ data centers, located in Austin and San Angelo, are operated by Atos. The French firm took over in 2015 when it acquired Xerox’s IT outsourcing division, including a contract that was first awarded by the Texas Department of Information Resources in 2011. While DIR consented to the transfer of its contract, the transaction irked members of the legislature who felt they should’ve had a chance to weigh in on an agreement worth $1.5 billion. The contract is set to expire next year, further prompting lawmakers’ interest in the state’s IT governance.

“We are not signing a contract with anybody until we have a chance to find out what’s really going on here,” Republican State Sen. Jane Nelson, who sponsored the bill requiring agencies to consider cloud storage, told the Tribune.

The Texas government started consolidating its data at the two centers more than a decade ago. Under a 2007 law, state agencies have gradually pivoted from buying and maintaining their own storage to leasing space at the Austin and San Angelo facilities. By 2016, 75 percent of state-agency data had been moved to one of the two sites.

But moving toward cloud storage could be a logical next step for Texas’ data-storage strategy. Other large states are in the process of moving to a “hybrid” model that combines on-site private storage with public cloud services. Georgia signed a $219 million contract with Unisys last August to develop a hybrid storage platform for its agencies, while Illinois is in the process of moving its data to its own hybrid system. 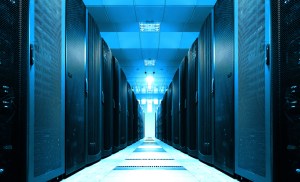