The San Francisco Bay Area — along with the rest of the state — is experiencing record-breaking temperatures, making it the perfect time to collect data to track the impact of extreme heat in the region.

The community heat mapping project, called Urban Heat Watch, is part of efforts by the city to understand and address health inequities exacerbated by temperatures above 100 degrees Fahrenheit.

The maps created from the Urban Heat watch project will be analyzed and used to inform resilience strategies for extreme heat and wildfire smoke, which will be developed by a new interdepartmental city initiative called the Heat and Air Quality Resilience Program.

On very hot days, some areas of the city can get up to 20 degrees hotter than nearby neighborhoods. The heat mapping project aims to identify these areas, known as urban heat islands, and find which communities may be disproportionately impacted by extreme heat.

“This effort recognizes that heat doesn’t impact out city’s residents equally and as climate change continues to accelerate, helps us make smart and targeted decisions on where to invest in cooling centers, or even where to plant new street trees to cool down,” Carmen Chu, San Francisco‘s city administrator, said in a press release.

The National Oceanic and Atmospheric Administration is supporting San Francisco’s community-led heat mapping project. The city is one of dozens of heat-mapping campaigns the agency has funded nationwide through its Urban Heat Island Mapping Campaign.

NOAA and other federal agencies launched the Heat.gov website to share real-time data on extreme heat conditions, such as those collected in San Francisco, earlier this year. The website is one of a series of actions the Biden administration has taken to address increasing temperatures due to climate change. 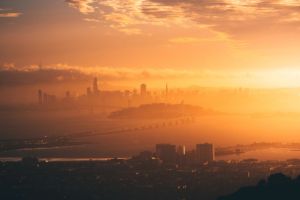