The San Francisco Board of Supervisors voted 8-3 Tuesday in favor of a policy that would allow the city’s police department to outfit remote-controlled robots with lethal capabilities in extraordinary circumstances.

Under the policy, which will be voted on a second time before heading to Mayor London Breed, the San Francisco Police Department may now use its robots to kill “when risk of loss of life to members of the public or officers is imminent and officers cannot subdue the threat after using alternative force options or de-escalation tactics.”

“There could be an extraordinary circumstance where, in a virtually unimaginable emergency, they might want to deploy lethal force to render, in some horrific situation, somebody from being able to cause further harm,” Supervisor Aaron Reskin said during Tuesday night’s meeting.

The three supervisors who voted against the policy cited ethical concerns and worries about further empowering a police department that in 2016 was found to stop and search Black suspects at a disproportionately high rate. (The same 2016 Justice Department review also found that nine of the 11 people who’d been killed by police were minorities.)

The San Francisco Police owns 12 ground-based robots, which it has used in non-lethal capacities, including reconnaissance and bomb disposal, for more than a decade. The robots have never been armed with firearms or explosives, but the police department asked the city to codify the option to do this if needed.

A California law became effective this year requiring every municipality in the state to list all authorized uses of military-grade equipment held by local law enforcement.

San Francisco is one of the first in California to define how robotic devices might be used in extreme circumstances. A similar policy on the use of lethal robots was considered last month in Oakland, where it was rejected by the local police department’s civilian oversight council. 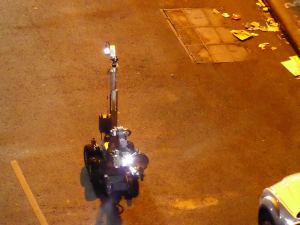