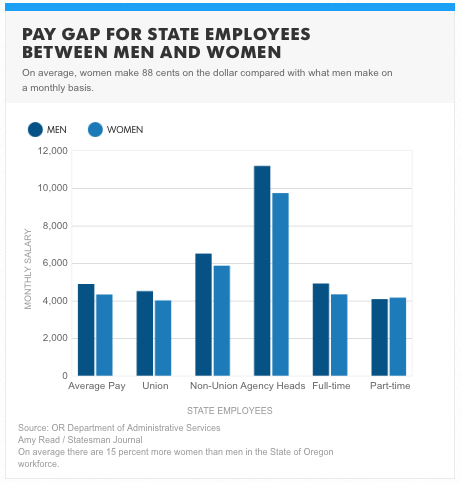 Women working for Oregon’s state government make about 88 percent of what their male counterparts earn, according to a report from the Salem Statesman Journal.

The amount is actually higher than what Oregon’s private sector pays. Women earn approximately 79 percent of what men make statewide for full-time work on average and only 67 percent when part-time jobs are incorporated.

“We’re at a better place to start (than Oregon generally), but that doesn’t mean there’s not a gap,” said Michael Jordan, director of Oregon’s Department of Administrative Services. “We’re trying to compare similar work on a gender basis and understand if there are any structural issues around how we pay for that work. The data will at least suggest some further questions for what we need to look at.”

Oregon Gov. John Kitzhaber sent a letter last month that makes closing this pay gap in government a priority, which has started an internal study of the issue.

One of the main issues associated with the pay gap is employee pensions, which are calculated based on the final average of employees’ salary, so a woman who made less over the course of her career would also get less in retirement.

Oregon’s pay gap is close to the one the federal government faces in which women make approximately 87 percent of what men make.

Jordan told the Statesman that the state’s collective bargaining system likely contributes to its more-equitable pay. Unions and management publicly negotiate what each position will be paid and what its pay range and differentials will be. There is little discretion in how to compensate people, he said, unlike in non-unionized parts of the private sector where companies have more latitude.

“The entire personnel system tends to be driven by that very open discussion with bargaining units…it’s very transparent to everyone,” he said. That transparency likely creates pressure to be equitable and fair, he said.

The state’s hiring process is also more open than in the private sector, he told the Statesman. The state has rigorous scoring systems for evaluating candidates, detailed job descriptions and everything is documented, Jordan said. As a result, there is less room for subjective criteria in hiring, he said.

Tennessee's Medicaid program is going in on process automation

by Benjamin Freed • 4 days ago
State