Whether it’s by offering up complimentary cybersecurity audits , lending technical expertise , or combining purchasing power to deliver services, there are lots of ways state governments can partner with their localities, but forming those symbiotic relationships often requires patience and persuasion. Forming them is often a matter of waiting for the right opportunity to arise, according to two state IT leaders well-versed in such partnerships who spoke Monday during the National Association of State Chief Information Officers annual conference in San Diego.

Deven Mehta, Ohio’s deputy director for enterprise shared solutions, said the state begins by strategically targeting localities with the use of “levers” or “value propositions” that will budge their reluctance to partner.

“They probably think they are better at doing what they have been doing for the last 50 years, if not more, and so why should they join the organization effort?” Mehta said Monday.

Mehta said that Ohio has a simple and proven model for engaging with local governments — for some entities the state offers agreements involving hardware or data centers, and for others it’s vendor management or enterprise services, but Mehta said they always show up with something of value in hand.

“They were very skeptical in the beginning, given the promises the state had made in the past and failed to deliver,” Mehta said.

He said the state shares a common service delivery platform, its radio and 911 system, and has helped build new platforms, such as a centralized workflow management system that all of the state’s 88 counties can use.

“That has been the biggest achievement for this administration because it improves the efficiency as well as reduces the amount of time case workers have to use to process a case,” Mehta said.

Nebraska State CIO Ed Toner told a similar story of searching for opportunities to form new mutually beneficial partnerships. When things break down in local government, he said, that has often proven the perfect opportunity for him to get his foot in the door.

Toner, who joined the state from an IT career in the private sector in 2015, said one small county, which he did not name, approached the state after a network outage that had lasted three days. He said the state was able to get the county back online within four hours and they now partner on a variety of services.

Toner said that when the city of Lincoln’s contract on its land mobile radio expired, he saw an opportunity to trade service provided by the state in exchange for an agreement from the city that it maintain its towers so all working in public safety around the state could benefit.

In Omaha’s Douglas County, Toner learned the local government wasn’t using 6,000 square feet of its data center and, like the state, didn’t have data center redundancy that could provide disaster recovery capabilities. He saw value for both the state and the county and pitched an agreement.

For sheriff’s departments across Nebraska, Toner said the state will refurbish radios for free on the condition that they buy service from the state thereafter.

All GIS data in Nebraska is centrally managed, Toner said, including that used by the Nebraska Public Service Commission, an uncommon arrangement, he learned afterward. The net result through this partnership and others is that the state gains valuable partners and localities pay just ten percent of what they would pay on their own, he said.

Mehta cited similar cost savings in Ohio. And for the state, he said the efficiencies gained have saved $162 million since the effort was started in 2012.

The money the state is spending is making a greater impact, he explained. Where previously 19 percent of Ohio’s IT spend was for services and the rest was for infrastructure, today, he said, 59 percent goes toward services, underscoring the ultimate value of partnerships between state and local government.

“We are making sure that we are not investing in the same platform 88 different ways for every 88 counties to use and trying to give a better client experience to Ohioans,” Mehta said. 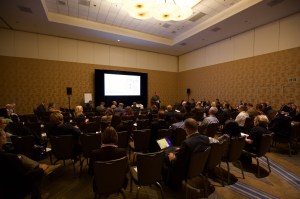