The decision comes amid heightened calls in recent weeks from state and local leaders to allow more time for internet service providers and residents to review FCC map data and challenge inaccuracies ahead of funding decisions being made under the Biden administration’s Internet for All program.

“We have heard concerns from some states and other stakeholders, and we have received requests to delay the timeline to give states more time to participate in the FCC’s processes for challenging and improving the National Broadband Map,” reads an NTIA blog post published Friday. “Unfortunately, a delay in the timeline would mean a delay in providing funding to communities who desperately need it, and it will not address many of the process concerns we have heard. Every day we delay is another day that communities are not connected. We feel the urgency to getting this funding out the door so it can be put to work for everyone in America.”

The FCC’s long-awaited broadband map was published Nov. 18, with regional broadband providers, community leaders and residents advised to review the data and provide feedback by Jan. 13, 2023.

The January deadline was provided with the intention of giving the FCC adequate time to make updates to the map ahead of the NTIA using it to derive a formula for distributing $45 billion in Broadband Equity, Access, and Deployment program grants to all states by June 30.

Several state, local and industry leaders have criticized this plan and the poor accuracy of the map provided by the FCC. Sen. Roger Marshall of Kentucky, a Republican, described the FCC and NTIA’s timeline as “too aggressive” in a letter to the NTIA dated Jan. 10.

“I respectfully request the NTIA delay the Jan. 13, 2023, deadline for submissions to the FCC’s broadband map for consideration in the BEAD allocation process and allow broadband providers, community leaders and residents an additional 90 days to submit challenges to the map,” Marshall wrote. “Our highest priority through this entire process should be the accuracy of the maps to ensure federal dollars are being properly allocated to the states most in need of additional resources.”

The FCC reported on Thursday it’s received more than one million requests to update map inaccuracies. FCC Chair Jessica Rosenworcel has said that the process for improving the map will be iterative and that its accuracy will increase over time.

Despite challenges sent to the FCC after Jan. 13 potentially not being included in the formula used by the NTIA to distribute federal funding, both agencies are encouraging continued feedback.

“We encourage states to continue to submit challenges to this map, which is meant to be a living document. Continued improvements will move us that much closer in making Internet for All a reality,” the NTIA’s Friday blog post read. 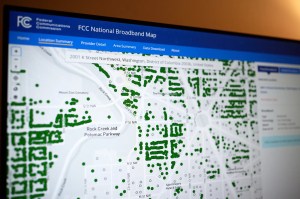