The National Telecommunications and Information Administration on Friday published a notice of funding opportunity and nearly 100 pages of guidelines for $45 billion in broadband funding that’s set to be distributed to states as part of last year’s sweeping infrastructure law.

The documents set out rules and timelines for states applying for grants from the new Broadband Equity, Access, and Deployment, or BEAD, program, a $42.45 billion fund designed to pay for new and expanded high-speed internet service. It includes funding for mapping networks, installing fiber and providing affordable internet subscriptions to low-income households.

“Digital equity is necessary for civic and cultural participation, employment, lifelong learning, and access to essential services,” the funding offer reads. “Yet affordable, reliable, high-speed internet access has remained elusive to many for too long, because they live in a location where no service is available, the speed or quality of the service available is unreliable, or the offering available is unaffordable or inadequate.”

Under the BEAD program, every state, as well as Puerto Rico and the District of Columbia, is eligible to receive at least $100 million in initial funds, with the remainder to be parceled out to states based on their proportions of underserved areas. States will, in turn, be required to submit their plans to award subgrants. Grant recipients will also be required to put up 25% of the cost of any awarded project, though the NTIA guidance states that matching requirements could be waived in “high-cost areas,” determined by factors like poverty rates or difficult topography.

The priority, though, is to connect communities that have no broadband service whatsoever, or nothing that reaches download speeds of 25 megabits per second, the current federal definition of broadband. After that, states are to address areas that have internet service, but still below 100 Mbps.

States and territories have until July 18 to submit letters of intent to apply for the BEAD program and to request up to $5 million to draft their initial implementation plans. From there, the timeline hinges on when the Federal Communications Commission launches its new broadband data maps, a long-awaited project that FCC Chair Jessica Rosenworcel recently told lawmakers will be completed by this fall.

Once the maps are live, though, the NTIA will inform participating states how much BEAD funding they’re eligible for, at which point they’ll have six months to draft initial proposals for how they’d use the grants. Final plans would come later next year and be implemented over the next half-decade.

Along with the BEAD program, the Commerce Department also set down guidelines for two smaller funds: The $1.5 billion State Digital Equity Act is designed to help states design plans to tackle their digital divides through initiatives like digital literacy training in low-income communities, while the $1 billion Enabling Middle Mile program is meant to help rural broadband services connect to larger, more powerful networks.

The NTIA has in recent weeks staffed up ahead of the new programs, including the hiring of Evan Feinman, a broadband adviser to former Virginia Gov. Ralph Northam, to run the BEAD program. States have been making moves of their own, like Delaware CIO Jason Clarke’s appointment last week of Tammy Shelton, a longtime Verizon executive, to run broadband grant programs. States have also been allocating money in their budgets to cover matching requirements in the BEAD program and other elements of the $1.2 trillion Infrastructure Investment and Jobs Act.

Other broadband programs in the law are being administered by the FCC, the U.S. Department of Agriculture and other agencies. Among them is a $14 billion fund to subsidize cheap high-speed internet subscriptions for lower-cost households, which the White House said this week could reach as many as 48 million customers. 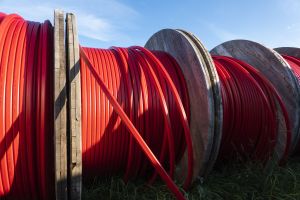