In an interim final rule, published earlier this month, the USDA outlines how the clearinghouse will help identify individuals receiving SNAP benefits from multiple states and applicants providing inaccurate information to benefits administrators. The USDA says the system will improve program efficacy and save $463 million over five years, while also creating safeguards that prevent SNAP recipients from having their benefits mistakenly taken away.

State agencies must comply with the provisions of the interim final rule by Oct. 4, 2027, giving states five years to update their data-collection systems and processes.

Despite the long lead time, compliance may prove burdensome for states and counties with limited staff. Some anti-hunger advocates also questioned why $5 million in congressional funding is being funneled into the relatively small issue of erroneous SNAP payments, rather than resolving pervasive SNAP accessibility barriers, an issue the Biden administration promised to address last month as part of the National Strategy on Hunger, Nutrition, and Health.

Just how burdensome the process changes and data reporting requirements will be, and how much work it will be for states to resolve suspected errors, is unclear.

The USDA Food and Nutrition Service administers SNAP in partnership with states, 10 of which delegate that responsibility to counties. Some of these counties are small and not well-resourced, and new data-reporting requirements could become a challenge without additional financial support, said Rachel Mackey, a legislative director at the National Association of Counties.

States already report some data on SNAP recipients to the federal government, but the clearinghouse will require more detailed and frequent reports. A spokesperson for the Virginia Department of Social Services said it currently reports statewide issuance amounts, the number of households served and the number of participants. He also said Virginia has safeguards that prevent in-state duplicate participation.

The clearinghouse will also require states to submit the Social Security numbers and birth dates of all current SNAP recipients on a daily basis. This data is to identify individuals receiving payments from more than one state, with any matches being referred to the states to investigate and resolve.

According to the memo, state agencies will receive training, tools and technical assistance to implement the rule, with an onboarding toolkit and pre-implementation checklist expected to be shared in the coming months.

A five-state pilot, designed to crack down on SNAP benefits fraud, started in 2013 with a system built by LexisNexis. Congress mandated that the USDA require states to participate in the clearinghouse in the 2018 Agriculture Improvement Act, also known as the Farm Bill.

Alabama, Florida, Georgia, Louisiana and Mississippi started the pilot in 2013 and Missouri has since joined, but Louisiana has dropped out, a Food and Nutrition Service spokesperson told StateScoop. But she said Iowa, Louisiana, Massachusetts and Montana will be the first four states to officially transition to the new clearinghouse and that eventually all states will join.

The long gap between the 2013 pilot and the 2022 interim final rule is a function of the care that has been taken by the FNS to ensure the new system is secure, the spokesperson said.

“Security was a primary consideration when designing and building the NAC interim final rule and system,” the spokesperson wrote in an email. “The design of the NAC system allows it to identify instances of duplicate participation, notify the affected states, and alert them to the participants enrolled in both of their states without USDA ever knowing the identity of the SNAP participant. Due to the nature of this, FNS has moved carefully and intentionally to ensure that the NAC system is secure, effective, and user-friendly.”

While the 2013 pilot was created to identify benefits fraud, the USDA does not mention this as the aim of the National Accuracy Clearinghouse in its recent interim final rule. SNAP recipients found to have intentionally violated program violations face stern punishments, and SNAP fraud is thought to be relatively uncommon. A 2018 report by the Congressional Research Service found that for every 10,000 households participating in SNAP, about 14 contained a recipient who was investigated and determined to have committed fraud, resulting in an overpayment that the recipient had to pay back.

Rachel Gershon, senior policy manager at Benefits Data Trust, a Philadelphia nonprofit that seeks to improve benefits programs, told StateScoop that SNAP is a program with “low error rates and high integrity,” but one that needs improvement in other areas.

“For decades, public-benefits policy has prioritized preventing fraud and errors over promoting efficiency, effectiveness or equity, and this has exacerbated rather than reduced racial and other inequalities, resulting in millions of children and older adults, veterans, and families needlessly going hungry,” Gershon said.

She said SNAP has big gaps in access, contributing to the $80 billion of untapped public benefits in the U.S. every year.

“The same kind of access to data and technology that’s deployed by the National Accuracy Clearinghouse to address duplicate payments can and should also be deployed to address the bigger issue that millions of eligible people are not receiving benefits,” she said.

Rather than investigating after the fact whether SNAP payments have been made in error, states should verify identities before payment, said Jordan Burris, a vice president at the identity-verification software company Socure.

“The National Accuracy Clearinghouse is a good start, but it’s just part of the equation,” Burris said. “What happens in the instance where someone has intercepted my benefit? They are the first one paid, and when I go to rightfully apply in a different place, I’m denied because someone pretended to be me elsewhere. Data matching in and of itself isn’t the answer to everything. There has to be a difference between recognizing identity for the purpose of confirming who an individual is and then eligibility on whether or not they should receive a payment.” 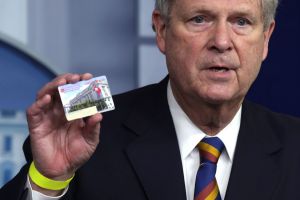