The news of Washington, D.C.’s selection as a “Lighthouse City” — a term Cisco uses to highlight cities with multiple deployments of the company’s smart cities products — comes as the city announced the completion of the first phase of its PA 2040 project.

“We live in a world today where technology is fundamentally at the heart of the strategy of every organization around the world — and it’s not just the private sector. … It’s happening in cities and countries around the world,” Cisco CEO Chuck Robbins said. “Isn’t it appropriate that we choose our first Lighthouse City to be the nation’s capital?” 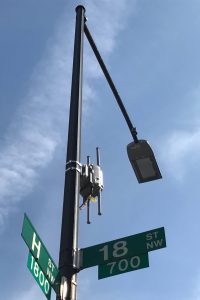 “We’re looking forward to really transforming our 70,000-plus streetlights across the District of Columbia,” Bowser said. “The resulting data will be used to create applications that can significantly improve district operations and reduce costs. PA 2040 creates a rich ecosystem supporting a wide range of smart city applications.”

The smart street lights, installed as a pilot across a three-square-block area, include sensors that either brighten or turn on the lamps when movement is detected or not detected within 100 meters. During the pilot, power consumption from the lights in the area reduced by 50 percent. The lights also support a public gigabit Wi-Fi network that spans from 17th & G St. NW to 20th & I St. NW.

When the Office of the Chief Technology Officer (OCTO) embarked on the PA 2040 project, they quickly discovered that the district’s Department of Transportation did not have the capability to remotely manage streetlights across the city, OCTO’s telecommunications lead Anil Sharma said. 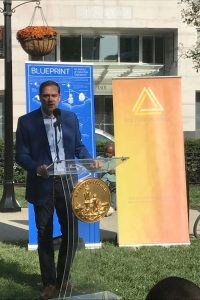 With the district being named a Lighthouse City, Cisco has also committed to investments in technology, startups and innovation centers across D.C. Their investment will also support the second phase of PA 2040, specifically around the city’s smart parking and waste management energy sensing efforts. 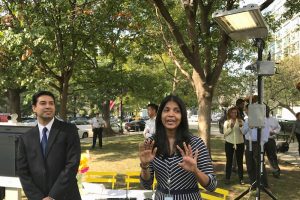 D.C. CTO Archana Vemulapalli and OCTO’s director of telecommunications demo the new sensor-enabled LED lights. The lights are equipped with motion sensors that illuminate the lamp when movement is detected within 100 meters of the sensor. (StateScoop)

“With this partnership, we will provide new opportunities to increase economic development, create jobs and provide innovative education across the public and private sectors,” Bowser said.

In addition to investments in specific technology, Cisco has also committed to bringing more of its network education centers to the city, as well as innovation centers for startups and students across the district.

On the waste management front, the city will equip trash cans with sensors to detect how full they are and report that data back to the Department of Public Works, which will reroute their trash collection routes based on how close to capacity the cans are.

“As mayor, I’m always excited when D.C. can set the bar and be the first in the nation, and that’s exactly what we’re doing in Washington,” Bowser said. “Some would have you believe that nothing is happening in cities, and we know that is not the case in Washington, D.C.”