Communities reeling from natural and man-made disasters should foster partnerships between government and the tech industry to build long-term resiliency, a group of state and federal government leaders said Tuesday at the South by Southwest conference in Austin, Texas.

While cities are increasingly focused on how they weather and rebound from disasters, coordination between the public and private sectors is crucial, especially when 90 percent of all critical infrastructure is owned by private entities, said Bob Kolasky, the director of the Department of Homeland Security’s National Risk Management Center.

“Our part of resilience is putting together public and private networks to make sure infrastructure is going to function during times of duress,” he said.

Andre Hentz, the acting deputy undersecretary of DHS’s Science and Technology division, said his agency is working with communities affected by severe flooding — like Ellicott City, Maryland, which suffered historic deluges in 2016 and 2018 — to find low-cost, internet-connected devices to help issue warnings to residents and businesses. Outfitting more cities with so-called “internet of things” equipment could help lessen the tolls of future incidents, Hentz said.

“Nine out of ten deaths in hurricanes are from floods,” he said. “Incident commanders need tools to help save lives.”

“One end of the tunnel was at Camden Yards, and the other was 1.8 miles away, and smoke was coming out at both ends,” he said.

That was only the beginning of the problems. O’Malley said the derailment ruptured a water main, which caused flooding on the streets above, and severed a fiber optic cable, slowing down internet traffic along the East Coast. It also led to the postponement of three Orioles home games. In 2001, O’Malley said, the siloing of information between city agencies made it difficult to predict what would go wrong next.

“Today, there’s no excuse for mayors not to know where those single points of failure are,” he said. “It’s like a drinking game every time someone says ‘separate silos.’ You can model cascading events.”

But cities still need more direct interaction with the industries that build the tools that could potentially help them stave off or mitigate the effects of future disasters, Hentz said.

“As city planners begin to think about their design, I want to see cities form partnerships to test new technologies,” he said. “Long term, we significantly need an industrial base that’s motivated around homeland security challenges.” 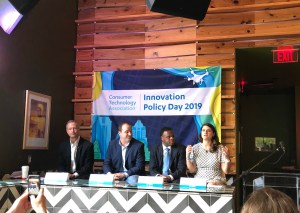 Cities and industry need to partner on resiliency after disasters