What a difference a fiscal year makes! For the past two budget cycles (FY 2012 and FY 2013), Florida Governor Rick Scott has been requesting deep cuts to health care, education and public safety to curtail the state’s declining tax revenues and multibillion-dollar deficit. Now, Governor Scott is touting a $4 billion surplus, and the fiscal year 2014 budget recommendations Scott released on February 6 actually add funds to state programs for the first time in six years. Also, in a reversal from years passed, Scott’s top budget priorities for FY 2014 include health care and education, both of which were once on the chopping block.

The governor’s FY 2014 state budget recommendation, also called the Florida Families First budget, asks for a pay raise for K-12 teachers and state workers, an increase in funding for state universities, and, surprisingly, accepts federal funds to support the Affordable Care Act. If adopted, the Republican governor’s FY 2014 budget would be the largest in state history, at $74 billion. 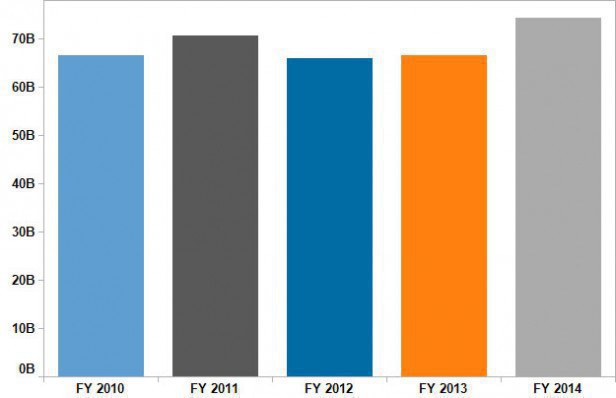 This economic upswing has allowed Scott to tailor his budget around job creation by cutting business taxes, investing in workforce training programs, and calling for $8.3 billion in transportation projects. Scott has also added $3 billion to higher education, essentially restoring funds to pre-recession levels. Additionally, Florida’s unemployment rate dropped to 7.7 percent, signifying an increase in revenue from income taxes. The combination of less spending and larger revenues has resulted in this unexpected surplus.

Now that the state is seeing a fruitful recovery, there is more push from department heads to restore services and programs and take on new projects. Despite cries for relief, Scott’s budget largely resists large-scale funding restorations; instead, he has smartly decided to split the difference by recommending a smaller increase in spending while opting to replenish the state’s once-dry emergency fund.

The top vertical increases in Scott’s FY 2014 budget recommendations (compared to FY 2013) focus on higher education (66.2 percent), transportation (33.7 percent), and public finance (24.3 percent) verticals. The Highway Safety and Motor Vehicle Department within the transportation vertical received a $20.6 million increase compared to FY 2013. This increase includes a $4.9 million funding request to procure a new motorist service system that is expected to be implemented over multiple years.

The top vertical decreases in the FY 2014 budget recommendations are for natural resources (-5.8 percent), K-12 education (-7.3 percent) and social services (-9.6 percent) verticals. The bulk of losses for social services are represented by a $575 million decrease from the Elder Affairs and Children and Family Services departments, stemming from reduced public services and pending layoffs. However, the IT expenditures under the social services vertical actually see a 7.9 percent increase from FY 2013, due in large part to projects such as the state’s public assistance eligibility system and the child dependency information management system. 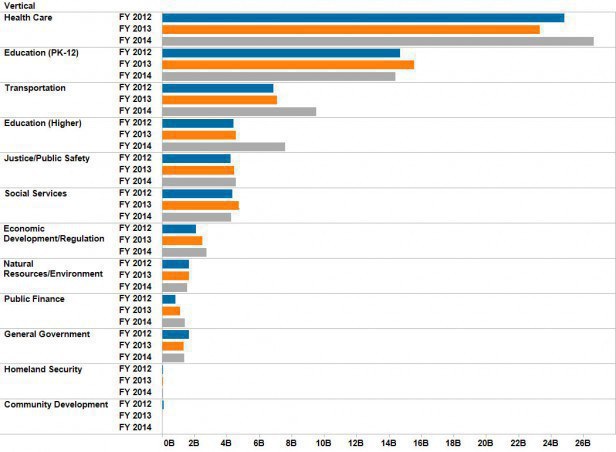 One of the bigger gaffes Florida faced during the 2013 fiscal year was the defunding and decommissioning of the Agency of Enterprise Information Technology. Last year, Scott vetoed legislation that would have replaced AEIT with a new central information technology agency that would have focused more on the state’s data center consolidation effort. Scott justified the veto by stating he believed the new agency’s scope was too narrow. Even though both Scott and the legislature promised to work together for fiscal year 2014 to avoid another misstep, it seems the House and Senate have each introduced competing legislation – though each is requesting a new agency, the agencies would have differing scopes and oversight schemes. An aide in Senator Jeremy Ring’s office confirmed that, despite political maneuvering, the hope is to create a central agency to manage the state’s IT efforts and oversee nearly $51 billion in IT contracts, rather than have 19 different state agencies inefficiently managing their own.

For an extended version of this article, please go here.

by Ryan Johnston • 22 hours ago
State