The Texas Department of Information Resources on Thursday announced that it’s selected Angelo State University as the site of the first in a planned series of regional security operations centers around the state.

The new SOC, once it’s up and running on the 11,000-student campus in the West Texas city of San Angelo, is expected to provide network monitoring and incident-response services to local governments and other entities around the region. The center will also provide training opportunities for Angelo State students studying cybersecurity and act as a “pipeline” of interns and future cyber professionals, according to a press release.

The technology bureau is still figuring out how much of a staff presence it will have at the new site, and an opening date has not been set, an agency spokesperson told StateScoop. But the department cited several factors for why it selected Angelo State for the first regional SOC, including the school’s computer-science department and its Kay Bailey Hutchison Center for Security Studies — named for the former U.S. senator — which trains civilian and military students in a range of law-enforcement and intelligence fields.

“We received exceptional proposals from several Texas public universities, but ASU’s proposal convinced us that they will hit the ground running and lay the foundation for this program’s future success for all of Texas,” Amanda Crawford, DIR’s executive director and the state chief information officer, said in the press release.

The new center is another product of a sprawling cybersecurity law Texas enacted last year known as Senate Bill 475. The legislation also resulted in heightened data-protection requirements for state agencies and the establishment of the TexRAMP system for assessing the security of cloud vendors.

If the Angelo State center is a success, the law reads, more facilities may follow in other parts of the state. 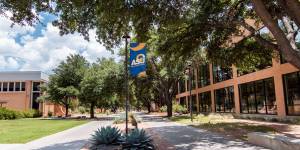