Faculty at Virginia Tech are building a new statewide broadband coverage map to get accurate coverage data to policymakers more quickly than the Federal Communications Commission currently does.

The Center for Geospatial Information Technology at Virginia Tech, a research center working with the Virginia Department of Housing and Community Development, is currently building a portal for Virginia-servicing broadband providers to submit their coverage data directly to state officials, Brandon Herndon, an operations officer at CGIT, told StateScoop on Wednesday. The project follows legislation passed this year that provides $424,000 for the commonwealth to build such a map by July 2022.

The portal, which Herndon said he expects to be completed in November, would allow Virginia ISPs to share data that’s more precise than the FCC’s current data, which is based on census blocks. Herndon said Virginia officials will be able to use the new data to make quicker decisions about where they should invest in broadband.

“If you look at our current map right now, the dates on the coverage are about a year old,” Herndon said. “Not only do we have bad data, we also have dated bad data. And that’s currently the best thing we have.”

The new data will enable the state to count the number of addresses in a census block that are covered, Herndon said, a more accurate methodology than counting every census block as covered if just one address has service. Some states, such as Georgia, have already accomplished this, he said. Georgia published its own broadband coverage map in June that enables users to see what percentage of a census block is served by broadband providers, something Virginia is aiming for in its future map.

A law passed last year requires the FCC to begin collecting polygonal data from providers, but Herndon said the agency “hasn’t put any teeth” into requiring that providers submit the more-precise data. If the FCC makes a public broadband coverage map that’s “of near identical or greater quality” than Virginia’s statewide map, then Virginia will waive its requirement for ISPs to submit data directly to the commonwealth, but that hasn’t happened yet, he said.

“They were supposed to start mandating providers submit both [census-block data] and broadband data collection information back in May of 2021, but most broadband providers are not,” Herndon said.

The state’s current broadband map only displays where broadband service was available as of June 2020, which doesn’t take into account much of the expansion that’s happened during the COVID-19 pandemic.

Herndon said he expects early versions of the new map to be presented to state officials and legislators in January, though a public map may not be available until spring,

“We’ve got a layout and we’re working on the provider submission guidelines right now, which we hope to have done in a week,” Herndon said.

Once the portal is up and providers submit their new-and-improved coverage data, Herndon and his team will have about a month to “slice it and dice it,” he said, anonymizing and cleaning the data before legislators and state agencies get it.

But Virginia already requires county officials to submit a letter of notice if they’re planning to apply for expanded broadband service, and it also has a challenge process if ISPs believe a grant was awarded somewhere that already has broadband service. So there’s no need to wait on the map to begin spending money on broadband expansion, Tamarah Holmes, the state’s broadband director, told StateScoop earlier this month. 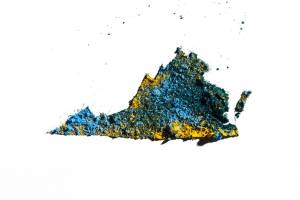 Tired of flawed broadband data, Virginia makes its own map