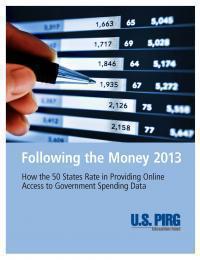 U.S. PIRG Education Fund released its fourth annual study today, titled “Following the Money 2013,” evaluating each of the 50 states on their spending transparency with an “A” to “F” grade.

“State governments across the country have become more transparent about where public money goes, providing citizens with the information they need to hold elected officials and businesses that receive public funds accountable,” said Phineas Baxandall, senior analyst for tax and budget policy with the U.S. PIRG Education Fund. “But standards for transparency are continually rising, so there is always room for improvement.”

Among the report’s findings:

Since last year’s “Following the Money” report, there has been remarkable progress across the country, with new states providing online access to government spending information and several states pioneering new tools to further expand citizens’ access to this data. Officials from 48 states provided the researchers with feedback on their initial evaluation of state transparency websites.

“Open information about the public purse is crucial for democratic and effective government,” said Baxandall. “It is not possible to ensure that government spending decisions are fair and efficient unless information is publicly accessible.”

The states with the most transparent spending are comprehensive about the kinds of spending they include, disclosing data on economic development subsidies, grants, expenditures through the tax code, and quasi-public agencies—recognizing that these items affect budget trade-offs just as traditional spending does. But the best states have transparency tools that are highly searchable, include detailed usable information, and engage citizens—allowing all the information to be put to good use.

States that have created or improved their online transparency have typically done so with little upfront cost. Moreover, the report shows that top-flight transparency websites can save money for taxpayers, while restoring public confidence in government and preventing misspending and pay-to-play contracts.

“We’ve been encouraging states to advance spending transparency with our report cards since 2010. The progress that we’ve witnessed each year is very encouraging, and states should continue to prioritize transparency going forward,” said Baxandall. “As many states grapple with long-term budget shortfalls, it is more important than ever for citizens to be able to follow the money.”

by Colin Wood • 59 mins ago
Modernization

by Benjamin Freed • 1 day ago
State