Cutting-edge technologies are coming to New York City’s public transit, in a bid by the city’s private sector and the MTA to fix a bus and subway system in crisis.

New York Gov. Andrew Cuomo made that crisis official in June 2017, after a train derailment made headlines. The city’s subway system was in a “state of emergency,” he declared, and pledged to fix a transit system that was bogged down by congestion and falling increasingly into disrepair.

Now, an acceleration lab is testing out imaginative technology solutions for the MTA — one of a slew of projects and plans that have tried to take on New York City’s public transit troubles since 2017. Four companies will work with the MTA in the lab’s yearlong pilot program that launched Tuesday. Their products, which have already gone through rigorous testing, include software that uses deep learning and cameras to track congestion, and analytics that predict bus breakdowns.

“Big, established organizations know how to do business with the MTA,” Natalia Quintero, the director of the Transit Tech Lab, told StateScoop. Instead, she said, the lab’s goal is to bring in smaller companies to work with New York’s systems — because they’re often at the front lines of transit innovation.

One of those companies is Switzerland-based Axon Vibe, which offers a mobile app that tracks transit delays. Users download the app, which then learns their commute and can sling them alerts when there are delays or shutdowns.

“We’re able to match the disruption alerts to the people who are actually impacted by those disruptions and, ideally, help steer them away or around those disruptions,” Boris Matz, Axon Vibe’s head of North American business development, said at a press conference. Armed with extensive user data, the app then provides detailed analytics on commutes for transit authorities.

The MTA will get a year of similar services from Veovo, which will implement an extensive infrastructure, including cameras, mobile-device detectors, and deep-learning algorithms, to track and predict traffic. According to the company’s website, 110 airports use its systems, as well as several train stations in New Zealand and Italy. It will be piloted on the L line of New York City’s subway.

The Transit Tech Lab, which launched in October 2018, is a collaboration of the nonprofit Partnership for New York City and the MTA. Quintero calls it “a vote of confidence on behalf of the private sector to make New York a thriving place for public transit.”

The lab received a barrage of applications from companies like Axon Vibe and Veovo in the fall, which private sector experts and MTA staff whittled down to just four through a months-long selection process and eight-week accelerator. Companies Preteckt and Remix will be piloting their products in the city’s bus system, in addition to Axon Vibe and Veovo’s work in subways.

Preteckt offers analytics that it says can predict bus breakdowns far in advance, while Remix designs accessible transit maps for the public.

The selections, Quintero says, were chosen only after extensive conversations with the MTA about the challenges the transit authority felt were the most pressing.

“What we do is not try to look for interesting, cool technologies that we could test,” she said. “We really want to support that the initiatives that the teams at New York City transit have already identified as being worth their time. It’s a wider innovation initiative.”

The lab, too, is looking beyond the problems bogging down the city’s public transit to the future of mobility in the city. Its broader goal, according to its website, is to “establish New York as the center of innovation for mobility.” For that, Quintero said, bringing in new companies to New York City’s transit is a needed first step. 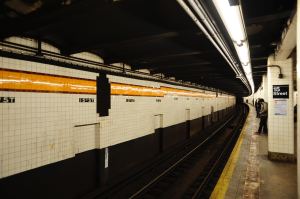