The Metropolitan Transportation Authority and the New York City Transit Tech Lab, a consortium of transit agencies that attempt to solve problems in transportation, named nine technology startups that will receive support as they develop software and sensor-based devices during a “rigorous” eight-week program.

“At the MTA, we believe that start-ups are key to unlocking innovative ideas to address our most pressing transportation challenges,” Mark Dowd, MTA’s chief innovation officer, said in a press release.

The participating agencies, which also include the Port Authority of New York and New Jersey, the New York City Department of Transportation, NJ Transit and Amtrak, will help the companies develop proofs-of-concept in the eight-week program, some of which will be approved for testing in subsequent pilot programs.

Among the startups is Acoustic Protocol, which develops a mobile app that converts public audio announcements into text messages for users who are deaf or hard of hearing.

NaviLens, meanwhile, develops a mobile app for visually impaired users that uses local smartphone data, such as accelerometer data and visual information collected by camera, to provide navigation guidance without the need for GPS or a data connection.

Okeenea develops a smartphone app for visually impaired users that communicates with beacons installed in the environment, which relay information like crosswalk status.

Miles is an app that awards users points for using various modes of transit, which can be redeemed for rewards, like a latte or a massage.

Last year, the program selected six companies, four of which continued on to develop regional pilots projects for things like early detection of mechanical failures of buses and an app that delivers personalized alerts to users based on past commuting behavior. 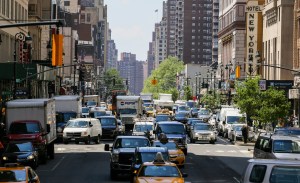