AUSTIN, TEXAS – Cameron Evans has been the chief technology officer at Microsoft Education for the past six years, where his job, he said, is to “skate to where the puck is going,” find out what the next major conversation around education will be and carve out a spot for Microsoft early on in the discussion. 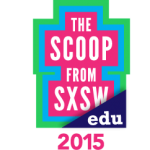 For Evans, that conversation has been filled with the whirlwind debates around student data privacy — and a topic he came to SXSWedu this year to speak about on a panel called, “Data Privacy: Can Innovation and Privacy Coexist?”

Evans sat down with StateScoop Tuesday, ahead of his presentation, to talk about privacy and other education technology issues in the Microsoft Lounge, where conference participants can learn about and play with different apps and learning tools. Following is an edited version of our Q-and-A:

StateScoop: Is this your first time at SXSWedu?

Cameron Evans: This is my second time at SXSW. Microsoft has been coming to SXSW Interactive since probably about the third year of SXSW, but the education portion is still relatively new. So we’re not too late, but we weren’t here for the inaugural year. Our presence continues to expand year after year at SXSW.

Q: Can you explain what you have here in the lounge?

A: We wanted to keep things simple.  There’s MinecraftEdu (which Microsoft acquired last year through a $2.5 billion deal). One of the things that people should get: Not only is Minecraft being used in education, but the common theme throughout the lounge is that all of the Microsoft technologies run on platforms beyond just Windows. Minecraft is a great example of something that runs on Sony PlayStation, Xbox, Windows, Macs, as well as Android and iOS devices.

And then on the other side of the room, we have our OneNote team showing people how they can caption memories for learning and teaching instruction. And then in the back of the room, we have a conversation on professional development, because we don’t want to just have educators getting new tools and technologies; we’re really focused on how can they improve on pedagogical practices to be more effective educators as well.

Q: What feedback have you gotten from people? What do they like or want more of?

A: They want more of everything! But one of the things people are [finding] eye-opening is OneNote. It’s actually been around for a decade, but for a lot of folks … are seeing OneNote for the first time because it’s available now on so many other platforms other than Windows. It’s been pulled out to accentuate a lot of capabilities we have around digital inking. We have a body of research that shows when students learn math and science, they are going to have more retention of their learning if they’re actually writing, annotating [and] drawing schematics versus just simply reading them or trying to type with a keyboard and mouse.

Q: What will you be speaking about at your panel?

A: Last year when we came [and] started with a panel on privacy, it was right after the conversation of, “what in the world happened with inBloom?” (inBloom was an information warehouse that stored student data that unveiled its platform at SXSWedu in 2013. It has since shut down).

So we’re a year later from that conversation, but the notion of student data privacy is becoming more entrenched in the education landscape. Because there’s this notion that things can be free, and if they’re free, then they must inherently be good for kids. But data has become a new currency … you have other collateral uses that can be made from that data, and that’s where the privacy concerns are arising.

This is a conversation from Microsoft that has gone on a long time, because if people don’t trust how the service providers use data about them, then they will stop using [the providers]. We’ve seen over recent years massive data breaches at retailers, service providers, the government … without appropriate disclosure. And then there are people who do not know they have consented to their data being used by a third party.

Q: What sort of information do you want to impart when you’re on the panel?

A: The panel poses a question: Can innovation and privacy coexist? And we wanted to make sure, as we continue this conversation, that it’s not lost on people that there are lots of meaningful things you can do with data that will customize instruction for all of our students so they can be successful in the classroom.

We’re trying to get to a place where there’s … a [curriculum] that fits an individual student, and when we can move forward with that use of data in an effective way. We can change the landscape so there is no student that ever has a bad teacher, never has bad learning experience, and can be successful throughout their academic career. In order to achieve that, we need new products, new services and we need the use of data to move that forward. It’s hard to make a conversation like privacy super sexy so that everybody wants to be there, but it’s one of those conversations that you want to participate in early.

Q: Do you think having more data is a good thing?

A: No, I think having more intelligence about the data we have is good. A lot of the data, by the time it actually is available for educators, is after the [fact] where it can be effective for students. The thing that we’re seeing change a lot is while there’s so many assessments at the end of the year, lots of schools are starting to look at growth as their most critical measure. That means there’s data being produced throughout the year from a multitude of sources, and they don’t all talk to each other. If they can get their systems to talk to each other in a more effective way it’s super transformative for us.

Q: What’s something you learned so far at SXSWedu?

A: I think the thing that has been most interesting to me is the way students are thinking about organizational behavior. [Students at SXSWedu] were doing project-based learning and they brought up a term they use, “pitchforks and torches,” when there’s a member of their team who is not being as productive as everyone else. They have to go after the person who is not producing and drags the team’s productivity down.

This is an interesting dynamic for kids to be thinking about as high school students. No matter what organization you work in, when you bring collaboration into play, there’s probably going to be one member of the team not producing at the same level.

We got into a conversation about how gamers today have a “reputation score.” So before you play with anybody online, you can determine if they’re a good person to play with – are they someone that leaves the game early before finishing? – and that reputation can be assessed and continually updated by other people who play with them. And we talked about how they should start thinking about their reputation in their teams. They should see how they can measure the effectiveness of each individual so their performance can adapt and improve.

Q: Is there anyone you’re particularly excited to meet?

A: Yes. Linda Darling-Hammond is here (a prominent professor at the Stanford Graduate School of Education). I’m hoping I get a chance to meet with her. She is one of the foremost authorities on assessment, and a couple years ago I read something that she had written that all the work we’ve been doing around next generation assessments is still not “next generation,” and we haven’t gotten to a place where we can assess competencies and skills richly for students in a way that mirror the workplace.

The challenges that companies like Microsoft, Google, Apple, IBM, Cisco, even pharmaceutical companies are trying to solve — they’re not multiple choice questions, they’re not fill-in-the blank, they’re not true or false, they’re beautiful questions of tremendous complexity. And we have yet to figure out a way in our assessments, are we presenting [students] with those types of beautiful questions? Not only to answer, but to ask.